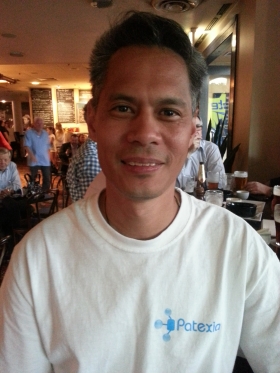 Patexia would like to congratulate Chris Seeto on a great career so far as a Patexia Researcher.  Chris works in Communications with agencies including Weber Shandwick, Momentum Worldwide and Porter Novelli. Chris joined Patexia in January 2014 with the goal of increasing his skills in research, communications, analysis, and problem solving. Chris has been an active participant in the Patexia Community and has won two of our Quorum contests: 3D Printing and Drones.

We interviewed Chris about his Patexia experience, and here is what he had to say:

How did you first hear about Patexia?

I think it was about a year ago when I was contacted by a Patexia community manager. I decided to have a look at the site and liked what I saw. However, it wasn’t until I saw the 3D Printing Patent contest that I decided to have a go.  I was familiar with the subject matter of the contest as I had done a research paper on it before.  What I liked most about the contest was finding a patent and having the Patexia community vote on who would win.  As it turned out, I took the opportunity, won the contest and it is now a part of my life’s story.

What is your background/area of expertise?

That’s simple!  No PhD or degree.  I am not an expert in a field, I am just a very good generalist.  I love to work in Communications and have two unique qualities that give me an advantage as a researcher.  I am very strong in using Google as a research tool and I have a natural curiosity.  I have always been fascinated by science, technology and a bit of history.  This is probably why I love reading Sci-Fi/Fantasy books.  On top of that, I constantly keep up to date with the news.  These include subjects like computers, social media, renewable energies, biology and biotech to name a few.  The one thing you need to do as a researcher is to build a strong case to support your point or position.

What has been the best part about your experience on Patexia?

Wow! There are several great experiences that I have had on Patexia.  I really enjoy the community voting (Quorum) contests due to the fact that it involves research and creativity needed to think outside the box for a new technology application that will benefit society and/or industry.  Another part is getting to read and learn from other people’s submissions.  For example, I really liked reading Simon Sunatori’s idea of how police can use drones and the benefits it would bring.  Then there is the best/worst part when I was waiting for the end of the community vote so that I could be declared a winner.  I was waiting anxiously as I saw people gaining votes and catching up to me.  I am looking forward to winning my first prize money in a non-Quorum contest experience.  I wonder what that is going to be like.

What is the most interesting search result you have found?

At this  stage, an interesting search result that I found had to do with 3D Printing.  The fact that it involved using multiple printheads was very simple and yet a very influential system in how 3D objects will be printed.  I like how I keep discovering and learning some really interesting things.  The contests that I have entered so far have really opened my mind to the different possibilities of where things are heading in the future.  I was also amazed at discovering how some people and companies were way ahead of their time.

Is there a key event, change, or insight that you think will be critical for the future of IP or your field that other Patexia members should know about?

I think an interesting event at this stage is what is happening with software patents.  The fact that there has been a rise in patent trolls and a growing voice of free and open software is really interesting.  I find patent trolls work against society as they use the system to control the channel and someone’s idea by trying to extort money out of them.  Patent trolls end up reducing the pace of innovation.  I prefer a free and open software system as it promotes the compatibility of systems and the advancement of technologies through a set of standards.  Society will benefit from this because software developers can develop and distribute the software that makes features like video more compatible with other software.  This process grows community innovation by creating efficiency and transparency to intellectual property.

We would like to thank Chris for his contributions to the community, and we look forward to working with him in the future.

Keep an eye out for our Featured Member next month!