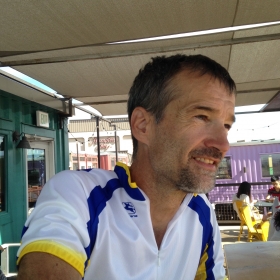 Patexia would like to congratulate Roland Stumpf on his great career as a Patexia Researcher. Roland  became a Patexia member in June 2013 and has participated in 27 contests, many of which he won, including our recent Reconfigurable USB Device challenge.

We interviewed Roland about his Patexia experience, and here is what he had to say:

1. How did you first hear about Patexia?

Three years ago, I started contributing to “the other” crowdsource patent research site. During a slow period, I stumbled on Patexia’s web site, and made this my second home in the field.

2. What is your background/area of expertise?

I have a PhD in physics, that I worked hard for at a Max Planck Institute in Berlin, around the time the Berlin wall fell and the two Germanies got reaquainted. I then had a career at government and industry labs in material science (computer modeling, but with experimental and device connections). I also became involved with energy related program development, and then attempts to connect researchers and IP developed at DOE labs with startup funding.

3. What has been the best part about your experience on Patexia?

Each interaction with the folks at Patexia, especially Andy Chu, has been a great experience. Prompt, courteous, and to the point. It is also nice that Patexia allows me to explain why I think a reference addresses each contest question, with opportunity for improvement upon receiving the contest manager’s feedback. The whole contest process is very reminiscent of the peer review process for scientific articles, in which I participated for many years. Like for most physics papers I reviewed, I find with patents today, that it is hard to have original ideas.

4. What is the most interesting search result you have found?

Strangely, I still remember my multiple inputs to an evidence of use contest for fuel cell power systems, where I did not win, but helped clarify the Hydrogen generation aspects of the contest, an area of my prior expertise.

5. Is there a key event, change, or insight that you think will be critical for the future of IP or your field that other Patexia members should know about?

With so much information at our fingertips, don’t be afraid to compete in a contest on a subject new to you.

We would like to thank Roland for his many contributions to the community, and we look forward to working with him in the future.

Keep an eye out for our Featured Expert next month!