Patexia seeks prior art for patents which allegedly describe an implantable bone plate that secures directly onto the bone via a fastener that penetrates directly into the bone, and includes modifications that prevent the fastener from coming loose after implantation. The patent describes the bone plate being used to secure a spinal column, while including applications to secure other bone injuries.

The implant is described as containing two components: a bone plate and a fastener, both of which are made from a biocompatible material, the bone plate specifically mentioned as being made from a single piece construction.

The fastener has an elongated shank that is the part that penetrates the bone, and a head at the end of the shank that has a diameter that is wider than the shank.

The bone plate has a hole to allow the fastener to pass through when penetrating the bone, but the hole includes two modifications:

This retaining element can achieve this through a deformable element or an element with an elastic flexibility that allows one way passage for the head of the fastener during bone penetration, but also prevents the head from traveling back out after implantation.

Finally, the junction between the bone plate and the fastener is further modified to allow for the fastener to be inserted at a variable number of penetration angles for optimal implantation, ideally via a ball and socket joint. 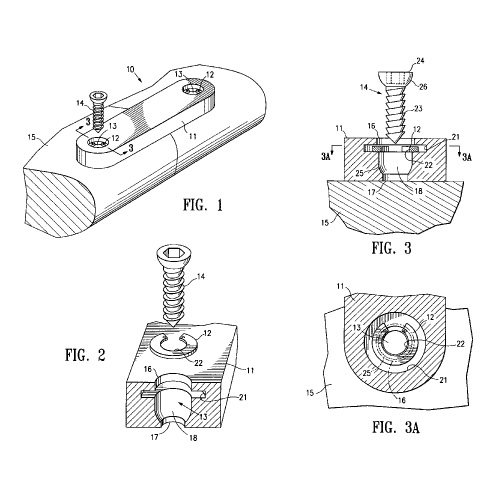 Learn more about bonus points at our Blog.