Patexia contests ask you to find, submit, and explain references that respond to our research criteria. If you are new, see patent and prior art basics and tips for Patexia's prior art contests, and refer to the submission notes below. The following questions will help you understand specifically what we are looking for in this study.

In this contest we are seeking prior art; published examples of an idea or invention before a specific date.

We are searching for two separate features. Providing prior art for either one (or both) of these features will satisfy the contest. The client is particularly interested in computer source code, manuals, descriptions, user guides, white papers, technical articles, and foreign (not U.S.) patents published before November 27th, 1991. 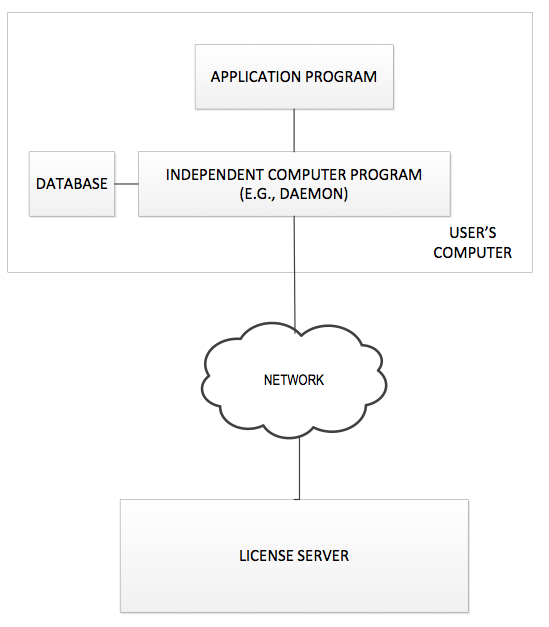 Description of Feature 2 (Questions 13-15)
Feature 2 describes a concurrent licensing system where the user can “borrow” a license from the license server. After the license has been borrowed, the user can disconnect his computer (e.g., a laptop) from the network and can run the application program for as long as the borrowed license is valid (e.g., for 3 days).

For example, an engineer in the U.S. may need to travel to Japan for work but must be able to utilize a CAD application program that is under concurrent license administration. Before

disconnecting his computer from the network, the engineer requests to borrow a license from the license server. If the borrowed license is granted, the engineer will be able to use the CAD application program even though he is not connected to the network.

Questions
To enter the contest, Patexia’s system will ask you the following questions. Contestants should focus their search by locating sources which answer these questions, and submitting a concise explanation of why the source(s) respond to a particular question. This explanation should specifically indicate where in the reference we can find the required supporting information. If you do not provide an adequate explanation on how to locate the desired information in your reference, you will not get credit and will not be eligible for contest prizes.

Entries must answer all contest questions. Please refer to the contest description for definitions of “computer program”, “application program”, “licensing server”, … All sources must be clearly dated or they will not be considered.

Selection Criteria and Prize Distribution
Patexia will evaluate each response to ensure each question has been satisfactorily answered. We will determine the contest winner and runners-up based first on the number of correct "yes" responses and second on the order responses were submitted. We will award 80% of the contest prize to the winning submission, and will distribute the remaining 20% among the qualifying runners-up. If the winning entry was referred by another user, a $350 referral prize will be subtracted from the 80% winner's award. Winner selection is based on community responses to Patexia's research questions and does not constitute a legal opinion on patent validity or related litigation.

Known References
PLEASE DO NOT SUBMIT ANY US PATENTS