If you are new, check out our tutorial contest first, and refer to the submission notes below. The following questions will help you understand specifically what we are looking for in this study.

We request previously undiscovered prior art including products, patents and non-patent literature which can help invalidate 8,070,319 and 7,837,355 -- “Kinetic Flame Device.” This patent describes a simple, low-power mechanism for visually simulating a flickering flame.

The device creates this visual effect through chaotic motion of a pendulum driven by a time-varying electric field. It comprises a pendulum with magnetic material on one end and a reflective surface on the other, an electromagnet for generating an electric field, and a light source for illuminating the reflective surface. A simple schematic of this device is shown below. 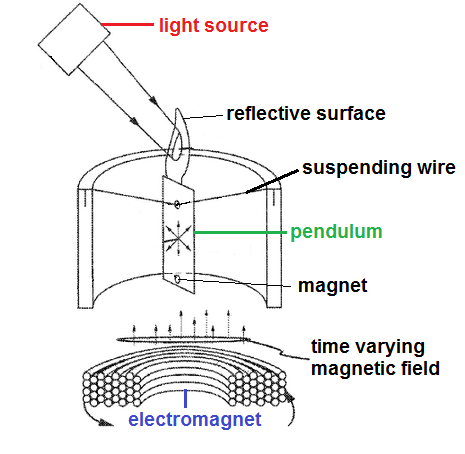 The pendulum is suspended from the housing of the device so that it can swing freely, with the pendulum’s magnet near the electromagnet. The electromagnet generates an electric field in which the pendulum’s magnet is either repelled or attracted. As the pendulum swings under the influence of gravity and interacts with the time-varying magnetic field, its motion is random. The reflector on the other end of pendulum also moves randomly and is illuminated by a light source, creating a flickering effect similar to that of a flickering flame.

The following questions will help contestants identify and clarify the specific criteria we’re looking for, as well as help us selected winning prize entries. The winner will be the first submission to answer at least questions 1-4 and provide a clear, concise indication of where in each source we can find the pertinent support for each question answer. All sources must be clearly dated before September 30th, 2007, otherwise they will not be considered for contest prizes.

Patexia will evaluate each response to ensure each question has been satisfactorily answered. We will determine the contest winner and runners-up based first on the number of correct "yes" responses and second on the order responses were submitted. We will award 80% of the contest prize to the winning submission, and will distribute the remaining 20% amongst the qualifying runners up. If the winning entry was referred by another user, a $500 referral prize will be subtracted from the 80% winner's award. Winner selection is based on community responses to Patexia's research questions, and does not constitute a legal opinion on patent validity or related litigation.

The following US patents are known prior art related to ‘319 and ‘355. Please do not resubmit them. Entries relying on known references will not be considered for contest prizes.