We request previously undiscovered prior art including products, patents and especially non-patent literature which can help invalidate claims 38-41 of US patent RE40,027 (‘027) - “Flashlights and other battery-powered apparatus for holding and energizing transducers.”  The patent describes a flashlight, light source, or similar device with a variety of features.

In particular we are interested in finding light sources with two lamps/bulbs pointing in the same general direction and sharing a single concave reflector, similar to that pictured in Fig. 1. One lamp/bulb should be at the focal point of the concave reflector (as in a normal single-source flashlight) and the second should protrude through the reflector’s surface.

UPDATE (1/25/2013): Note that we're looking for a source where the second bulb/lamp (NOT that at the focal point) has a refractive lens attached to the bulb itself (question 6). Refraction is a change in direction of light passing into a medium, so the lens attached to the second bulb should change the direction of of the light coming from that bulb.

Non-patent literature can include, for example: advertisements, product documentation, technical descriptions, items in a museum or personal collection, videos or photographs of a device with these features, etc. Submissions may be documents in English or in a foreign language published in any country before November 24, 1991, or evidence of devices used or sold publicly in the United States before November 24, 1991. 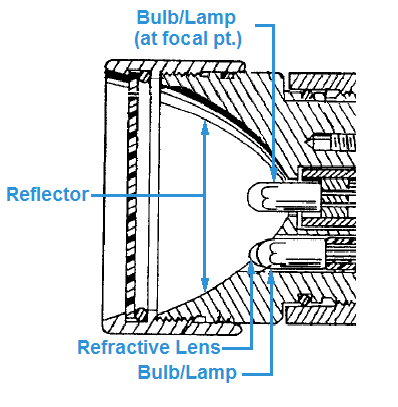 If you are new, see patent and prior art basics and tips for Patexia's  prior art contests, and refer to the submission notes below. The following questions will help you understand specifically what we are looking for in this study. To be eligible for the full prize, entries must satisfy all 11 questions. If no user responds to all 11 questions, entries responding to at least questions 1-5 will be considered for a partial reward.