If you are new, see patent and prior art basics and tips for Patexia's prior art contests, and refer to the submission notes below. The following questions will help you understand specifically what we are looking for in this study.

We request previously undiscovered prior art including products, patents and non-patent literature which can help invalidate claims 1, 64 and 76 of US patent 5,921,986 -- “Bone Suture”-- and 1, 25 and 26 of US patent 8,147,514--”Apparatus and method for securing a portion of a body.” These patents describe a bone suture and anchors for securing sections of bone, tissue, or other segment of body tissue together to facilitate healing. Fig. 1 illustrates a cross section of a basic form of this device holding together two portions of a fractured bone. 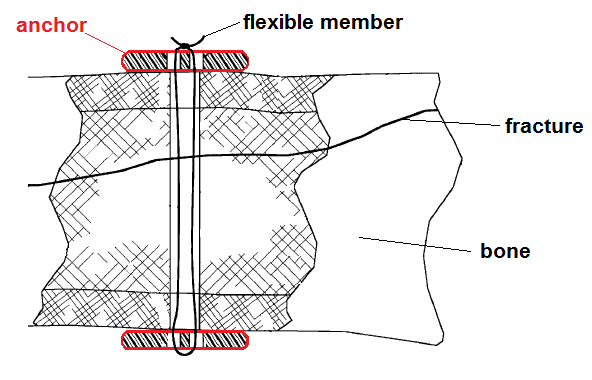 The suture is a flexible piece of material such as a thread or wire. The suture passes down a channel formed through the two pieces of bone, and applies tension to hold the two sides of a fractured bone together. Instead of attaching directly to the bone, the suture ties around two anchors which together clamp the two bone or tissue segments in place as illustrated in Fig. 1. Both anchors should be long enough to span the width of the channel. 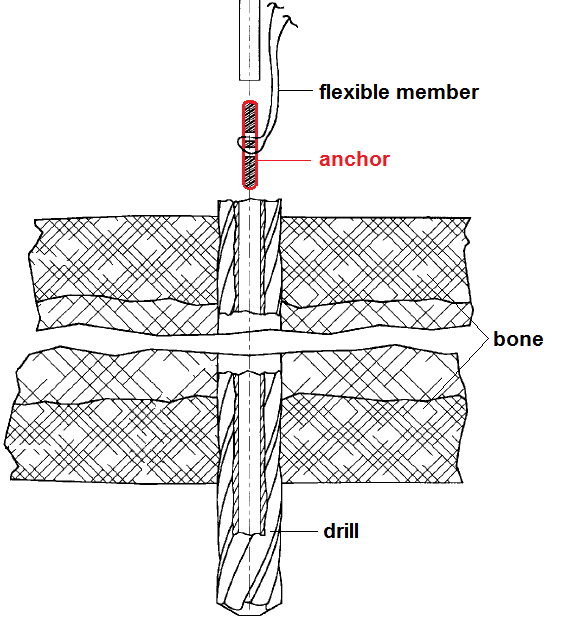 Instead of a second anchor, the patent also describes using a deformable suture retainer or other anchoring device to hold tension in the suture and clamp the two fragments of bone together. This clamping configuration can also fasten muscles or other tissue segments to bone.

The following questions will help contestants identify and clarify the specific criteria we’re looking for, as well as help us selected winning prize entries. To qualify for contest, each entry should correctly answer "yes" to at least questions 1-3.

Patexia will evaluate each response to ensure each question has been satisfactorily answered. We will determine the contest winner and runners-up based first on the number of correct "yes" responses and second on the order responses were submitted. We will award 80% of the contest prize to the winning submission, and will distribute the remaining 20% amongst the qualifying runners up. If the winning entry was referred by another user, a $500 referral prize will be subtracted from the 80% winner's award. Winner selection is based on community responses to Patexia's research questions, and does not constitute a legal opinion on patent validity or related litigation.

In addition to the patents listed in the ‘986 and the ‘514 references, the following references are also known related prior art. Please do not resubmit them. Entries relying on known references will not be considered for contest prizes.