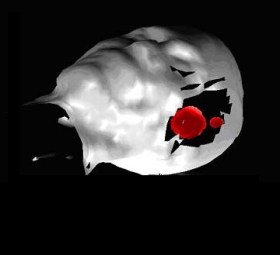 Space age imaging equipment, up until now developed and used by NASA to study distant stars, will soon be a critical tool of the operating room. The infrared camera, developed in a partnership between the Center for Space Microelectronics Technology at NASA’s Jet Propulsion Laboratory and the technology company Amber, utilizes highly sensitive quantum-well infrared photodetectors (QWIPs) that constitute an array of infrared detectors that cover much longer wavelengths than currently exist and is 20 times longer in wavelength than visible light. At room temperature, objects exposed to these wavelengths glow with a red-hot luminescence.

NASA scientists have used the technology to map the Earth’s surface and search the universe for distant objects. Other uses include military, firefighting and law enforcement, particularly search and rescue missions, as well as environmental monitoring of pollution and weather patterns. To date, medical applications have been limited to mapping the origins of skin cancers. Until now.

One of the biggest challenges of neurosurgery is tumor-removal operations. Currently, ascertaining where the tumor ends and normal brain tissue begins is a tenuous undertaking. The long tentacles of the glioma, one of the most common brain tumors, present a tough challenge—removal of too much tissue could significantly impair the patient, but not removing enough tissue means that the cancer could recur. Current procedures involve slicing into the brain and removing as much tumor tissue slice by slice as they can see by magnification. 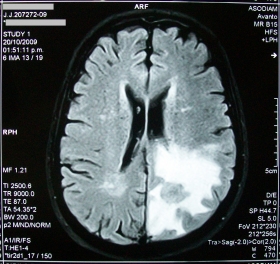 "Brain tumor tissue looks the same as healthy tissue on the edges," said Babak Kateb of the Keck School of Medicine, a research fellow and lead scientist of the project. "Tumor cells use different biochemical pathways from normal cells, and when researchers use the infrared camera, they can pick up hotspots or areas of tissue warmer than normal tissue."

The NASA camera is designed to help in exactly this circumstance. The camera picks up UV light emitted by a chemical, nicotinamide adenine dinucleotide hydrogenase (NADH), selectively found in overactive tumor tissue but not healthy tissue.

"The ultraviolet imaging technique may provide a 'metabolic map' of tumors that could help us differentiate them from normal surrounding brain tissue, providing useful, real-time, intraoperative information,” said the study’s researchers.

In the current pilot study, which is a partnership between Cedars Sinai Medical Center, NASA and Maxine Dunitz Neurological institute, the highly sensitive camera will be placed near the surgical field to record images as the doctor removes tumor tissue without the aid of the camera in decision-making. Later analyses will juxtapose laboratory results with images to assess efficacy. Eventually, doctors hope to incorporate the technology into operating rooms as standard procedure for various types of tumor removals that encroach into soft tissue.

Infrared detectors only work when kept under extremely cold temperatures. The camera used in this study has a closed-cycle refrigerator as a component. Any future streamline use in operating rooms will have to ensure proper maintenance of temperature (and backup storage) to ensure the proper results. If tumor presence can also be automatically (and accurately) detected through infrared scanning, it also opens up the possibility of an entirely automated surgery through robotics equipment that can simultaneously communicate with the UV technology and remove tumor tissue, thereby entirely eliminating human error.