Last week we reported the 2016 top 25 law firms ranked by the number of patent practitioners. This week, our Data Science Team looked at the same raw data for registered patent attorneys and agents to identify the top 25 IP-intensive companies in the U.S., those with the largest number of registered patent practitioners. It was a mixed result, as the top 10 companies were from high-tech, healthcare and chemical / material sectors.

The first company was IBM with 154 registered practitioners. If IBM had been a law firm (referencing our list last week), it would have been the seventh largest U.S. law firm in terms of number of registered patent practitioners. 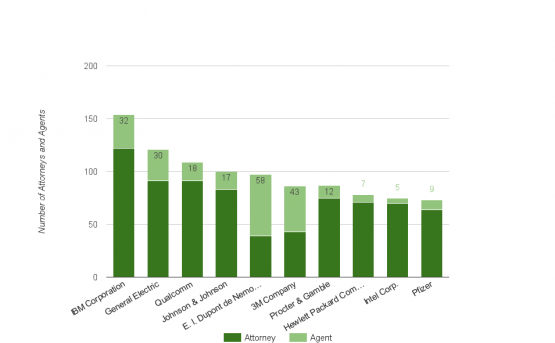 We obtained the data from the Office of Enrollment and Discipline (OED) at the USPTO. The data is up to date as of July 12, 2016.

We learned that the top 25 IP-intensive companies employ 1,721 registered U.S. patent attorneys and patent agents, or approximately 4% of the 44,424 patent practitioners registered to practice before the USPTO. This number is about half as many as the 3,566 practitioners working at the top 25 law firms, which have about 8% of the total number of practitioners.

Please note that recent changes, such as new hirings, may not appear in the above table, as not all attorneys or agents update their status as soon as it changes.

The only two non-U.S. companies on the list are Siemens from Germany and GlaxoSmithKline from the UK, which shows the importance of the U.S. market to their businesses and their level of global activity for having such a large set of U.S.-based patent practitioners.

The two youngest companies on the list are Google and Intellectual Ventures. Google is less than 20 years old and did not have a large patent portfolio for its early years of existence. However, in the past several years it has aggressively been filing new patent applications. Google’s patent practitioners are mainly in California (41) and New York (11). On the other hand, Intellectual Ventures was formed in 2000 only to conduct business in IP. They have one of the largest patent portfolios, most of which was obtained through acquisition, with a smaller portion developed organically. 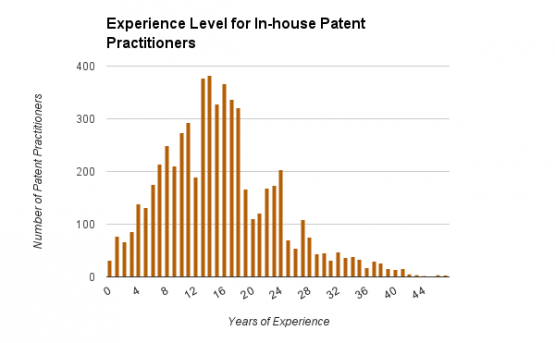 As another interesting data point, we analyzed all in-house patent practitioners listed among the first 2,000 entities, identifying the states with the highest number of in-house practitioners. As expected, California ranked first with more than three times the number of practitioners as Texas, which ranked second, largely due to the presence of major oil and gas companies, such as Schlumberger and ExxonMobil. 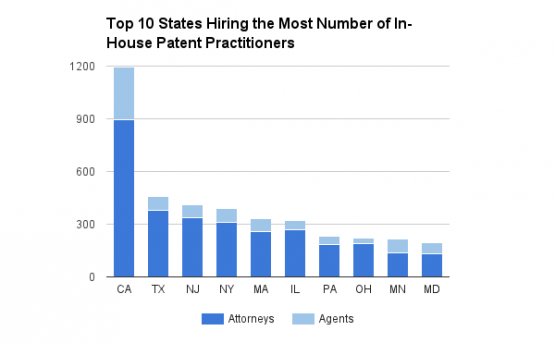 In the following weeks, we plan to calculate the probability of landing an in-house job for a patent practitioner.

Update and Correction: Philips did not appear in the original list as two of its entities, Philips Electronics and Philips Intellectual Property and Standards were listed as two separate entities. After combining them, Philips ranked 25th and now has 40 patent practitioners registered in the US.