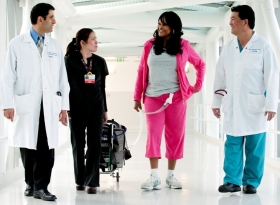 Italian doctors at Rome’s Bambino Gesu hospital saved the life of a 16-month-old boy this week by implanting the world’s smallest heart to keep him alive until a permanent donor could be found. The baby suffered from dilated myocardiopathy, a heart muscle disease in which fibers of the heart are enlarged and eventually stop the heart’s ability to pump blood effectively. The device, which had previously only been used in animals, weighs only 11 grams (adult devices typically weigh 900) and pumps blood at 1.5 liters per minute.

Italian surgeons called the feat a “milestone,” and hope that it represents a significant stepping-stone in the eventual goal of developing a permanent implant for heart transplant patients.

The first-ever artificial heart to be implanted in a human being was the Jarvik 7, in 1982 in patient Barney Clark, who lived 112 days after his surgery. The prototype for the Jarvik 7 was conceived as early as 1949 at the Yale School of Medicine, utilizing an Erector Set, and successfully kept a dog’s heart beating for 90 minutes. Other animals to receive various improvements to this model included a calf and a bull, until the National Institutes of Health started an Artificial Heart Program in 1964, with the goal of human transplantation. Although Robert Jarvik, then of the University of Utah, was the project manager for the prototyping and design of the Jarvik 7, its engineering, development and refinement needed the efforts of over 200 physicians, engineers, students and faculty.

Currently, the vast majority of artificial hearts are used to keep patients alive while they wait on a list for a suitable donor heart to become available, a frustrating process that can last anywhere from one week to a couple of years. The modern version of the Jarvik 7 is known as the SynCardia temporary CardioWest Total Artificial Heart, and has been implanted successfully in more than 800 people as a bridge to transplantation.

SynCardia (which was also the first company to receive FDA approval for an artificial heart) is trying to change that. They are looking to expand the use of their Total Artificial Heart, now available only to heart transplant patients waiting for a heart, to patients who cannot qualify for a heart transplant because of other complications such as cancer or health issues. A recent FDA humanitarian exemption will expand availability of the TAH to 4,000 heart transplant patients. The SynCardia machine has proven to be both reliable, with a failure of less than 1 percent, and durable, with the longest patient surviving 1,374 days before finally receiving a transplant. Nevertheless, a huge drawback has been the 400-pound driver that powers the TAH, keeping patients anchored in the hospital. However, SynCardia recently gained approval for a much lighter 13.5-pound driver that patients would be able to carry with them. Both of these developments are significant for the field of heart transplantation, where the biggest challenges are the volume of patients (relative to the number of hearts available) and the stringent limitations this places on heart recipients’ overall health to qualify. 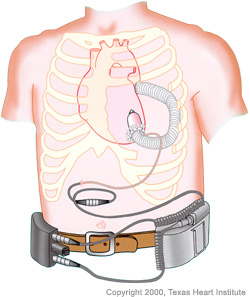 Jarvik Heart, a research arm which carries the prestige of bearing the name of the original maker of the artificial heart, and continues to develop and manufacture cardiac assist devices, is taking the technology one step further -- towards destination therapy (DT), the first of its kind to support permanent, long-term artificial heart support for patients who are either waiting for a heart, or are at the end stages of heart failure and therefore do not qualify for a transplant. The Jarvik 2000 Model has been used in over 200 patients in Europe, and sets the record for longest survival of a heart device patient at 7.5 years. The current standard for DT therapy is the HeartMate II left-ventricular assist device (LVAD), however only a few LVADs have so far been used long-term because of frequent complications such as infections, thromboembolism and mechanical failure.

Unlike the LVAD, which uses an abdominal cable and pump pocket, the Jarvik 2000 uses a behind-the-ear cable and has no pump pocket, both of which could represent serious upgrades to the quality of life for patients with implants. A new study will follow 350 total subjects, in both LVAD and Jarvik 2000 groups, assessing them for long-term survival and complications such as infections.

There is no question that artificial heart technology has advanced tremendously since Robert Jarvik’s inspired invention. Today, patients waiting for a hart transplant have the option to head home with a portable artificial heart and resume their lives. In 2009, the fully implantable AbioCor Total Replacement heart was surgically implanted in a 76-year-old man and became the first artificial organ. It is not inconceivable that in the near future, long waiting lists of languishing heart patients will be a thing of the past. Until then, further research and innovation needs to develop intermediate heart devices that are more compact, affordable and comfortable.