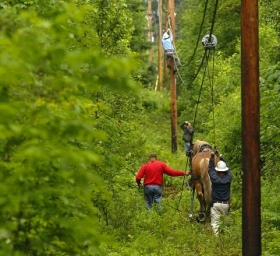 It's a wired, connected and integrated world in the 21st Century, but not for everyone. A recent FCC study found that 19 million Americans have no access to high-speed Internet. In 2012, that's almost synonymous with having no Internet at all, as most of the reasons people use the Internet presuppose high-speed Internet. What's more, 14.5 million people without high-speed internet live in rural areas, accounting for 5 percent of America's total population. It's not wild speculation to say that this will further increase cultural gaps between cities and the countryside.

The FCC has to report to congress every year with regard to broadband penetration in the United States. Further, the Telecommunications Act of 1996 mandates that broadband infrastructure be constructed in a "reasonable and timely" manner to all corners of the country. However, the most recent FCC report finds these efforts to be severely lacking. Indeed, around 80 percent of libraries and schools who get federal funds for Internet access state that their current connections do not meet their needs. This makes the FCC's stated goal of having broadband for every man, woman and child in the United States by 2020 a difficult challenge indeed.

However, there's one statistic that shows the need for broadband penetration might be overblown: Less than half of Americans with access to cable or DSL use them. People who don't say they can't afford it, don't know how to use it or just don't see the Internet as important or relevant to their lives.

Still, it's certainly a black eye for a country that prides itself on technological innovation, social equality and high living standards. America sits between Japan and Saint Kitts and Nevis in terms of percentage of broadband penetration as of 2010. But in terms of the actual number of broadband subscribers, the United States is second only to China. America's Internet speeds are comparatively slow, not even cracking the top 10 in the world. 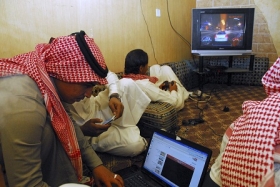 For sure, one doesn't simply wish broadband infrastructure into existence. It requires an enormous capital infusion to bring the Internet to the four corners of the earth. And while cable and DSL are big now, the move is toward fiber optic connections, underscoring one major problem with just such a capital outlay: If past history tells us anything it's that today's technologies will soon be yesterday's nostalgia piece. Remember Prodigy?

For it's part, India, the country with the 12th highest number of broadband users (though a very low rate of broadband penetration -- less than 1 percent) didn't even bother with wired connections when it hooked up to the World Wide Web. It skipped right to the WiFi phase of development and honestly, who could suggest a better course of action? The trend with Internet connectivity has been, since the very beginning, about getting more data to more places faster with smaller and smaller devices. Given this context, it simply doesn't make sense of the unconnected countries to start building old-school connections.

But this brings us back to the point about capital investment: Creating the type of infrastructure that can support high-speed internet connectivity isn't cheap. The return on investment might take years or even decades to actually be worth, it particularly in poorer, more rural countries. While it might be a few years off, it's hard not to wonder if mobile connectivity isn't the wave of the future. Mobile certainly hasn't been insulated from the "bigger, better, faster, more" tendencies of the Internet. Building a single tower for a community to use collectively might be the way to get around the arduous and expensive task of running cable to every home in the world.