Moldex-Metric, Inc. filed a trademark infringement lawsuit against McKeon Products.  Moldex-Metric asserted that McKeon infringed its unregistered trade dress consisting of a bright green color for foam ear plugs by using a similar green color for ear plugs.  Below is a side-by-side comparison of the parties’ ear plugs: 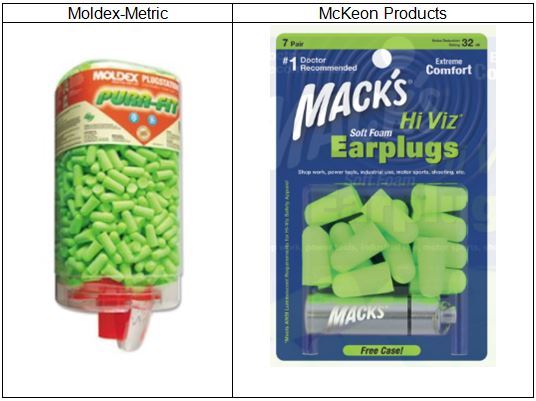 The district court in the Central District of California granted summary judgment in favor of McKeon after finding that the bright green color for ear plugs is functional and thus not protectable as trade dress.  Moldex appealed to the Ninth Circuit.

The test for determining whether a feature is functional is whether the feature is “essential to the use or purpose of a product or it affects the cost or quality of the article.” Inwood Labs, Inc. v. Ives Labs, Inc., 456 U.S. 844, 850 n. 10 (1982). The Supreme Court in a later case added that a functional feature is one where exclusive use would put competitors at a significant non-reputation related disadvantage. Qualitex Co. v. Jacobson Prods., Co., 514 U.S. 159 (1995).

Here, the district court found that the green color used by Moldex played a significant role in allowing the ear plugs to be seen during safety compliance checks, and thus, the bright green color of the ear plugs was functional.  The district court distinguished this case from Qualitex where a green-gold color for dry cleaning press-pads was found not to be functional.  Specifically, the district court stated that in Qualitex the green-gold color was not essential to the product because any color could achieve the function of hiding stains on dry-cleaning press pads.  Also, the district court determined that the availability of alternative colors for allowing visibility of ear plugs during safety compliance checks need not be considered since it was already determined that the color contributes in a significant way to the operation of the product.

The Ninth Circuit found that the district court erred in not considering the availability of alternative colors in deciding whether the bright green color for ear plugs was functional.  The functionality test of whether a feature is essential to the use or purpose of a product is not always easily applied, especially in cases involving color.  In these cases, the availability of alternative designs becomes more important in assessing functionality.  Because a reasonable jury could find that evidence of alternative colors outweighs the evidence of the color providing some utilitarian advantage, the Ninth Circuit found that there remained a dispute of material fact as to whether Moldex’s bright green color is functional.  Therefore, summary judgment on functionality was inappropriate.

So what does this mean for the fashion industry?  It is a reminder that color may be protectable even if it serves some function, so long as there are other colors that will serve the same function. The owner will need to demonstrate that the color is not merely decorative, and that consumers recognize the color as a brand signifying the source of the product, known as “secondary meaning.”  To establish secondary meaning, the owner must provide evidence of extensive sales and advertising of products in which the color is prominently featured and promoted.  “Look for” advertising can be helpful in educating consumers of the trademark significance of a color.   The owner may also need to provide testimonials or survey evidence demonstrating that consumers associate the color with the owner. With careful planning, a company may be able to create proprietary rights in a color identified with its products, and prevent competitors from using the same color.