Dilligent Patexia users may have noticed a new type of contest recently appear on our site: “commercial use” or “licensing” searches. In fact, we just closed our first search of this kind (investigating a particular antibacterial agent). Today’s note will focus on patent licensing, and will hopefully provide our users with a valuable introduction to this aspect of patent research.

What is patent licensing?

As we’ve discussed before, patents are a form of intellectual property protection. They provide a means for innovators to turn their ideas into tangible assets, which can then be monetized in a variety of ways. In principle, patents provide a temporary monopoly to their owners--the right to prevent other organizations from using that idea. Developing the idea and selling a product based on it is just one way that the patent owner can make money.

Another way is by allowing others, for a fee, to produce and sell products based on that invention. This arrangement is known as a licensing agreement; the company purchasing the rights to practice a patented invention is the licensee, and the patent owner is the licensor. Licensing agreements come in all shapes and sizes, but the basic principle is always the same: the licensor sells the rights to use a patented invention to a licensee. 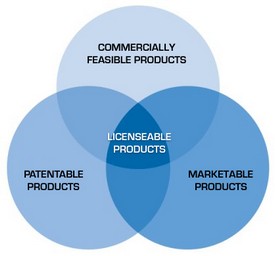 At first glance, licensing agreements may seem to contradict the fundamental purpose of patents: preventing others from practicing an invention. In fact, there are many reason a patent-holding company may choose to license the right to practice an invention to other, sometimes even competing, companies. Many of these reasons come down to a company’s ability to produce enough of the invention to sell to the entire potential market for the invention. This could mean that the patent-holding company cannot produce a sufficient volume of the invention to satisfy demand. In this case having a second company produce more of the produce for a licensing fee will mean additional income for the patent-holding company. Even though they may not earn as much as they would if they could produce a sufficient quantity of the invention, this small additional income is better than nothing. Similarly, a second company may simply have better access to additional markets. For example, it may be more cost-effective for a company based in California to license their invention to a New York-based company rather than ship all their products across the country.

Another important reason for licensing is the increasingly co-dependent nature of technology. A smartphone necessarily contains a whole variety of inventions which are patented. Unless the smartphone manufacturer owns patents for every protected component of the device (which is unlikely), licensing the various components is essential. This codependency, particularly for different technologies which interact using a particular standard (for example, cell phone radio communication standards), has given rise to complex licensing issues. Standards-essential patents, as patents for these technology standards are called, are at the heart of debates regarding compulsory licensing agreements and Fair, Reasonable, and Non-Discriminatory (FRAND) terms.

Licensing intellectual property can, and should, become an important source of revenue for companies or organizations with intellectual property. Information, particularly about the market for an invention and similar technologies, is crucial to the process of locating and developing licensing opportunities. Patexia’s licensing search aims to gather this type of information by searching for similar technologies, potential infringers, and other products which could be improved with the use of a particular invention.