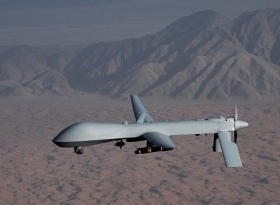 Last month, the Japan Maritime Self-Defense Force (JMSDF) published several photos of an unmanned aerial vehicle (UAV) on a frigate as it crossed from the East China Sea into the strait of Osumi. The UAV, which was photographed in operation by a Japanese surveillance aircraft, was not owned by the United States or Israel -- two major players in this segment of the aerospace industry.  It is the property of the Chinese People's Liberation Army Navy (PLAN). Interestingly, this unnamed UAV -- which has never been seen before -- was being deployed on a Chinese Type 054A missile frigate which, unlike an aircraft carrier, does not have a landing strip.

This UAV sighting is very much in alignment with the findings of a recent report published by The Teal Group. The Teal Group, a US beltway aerospace and defense research firm, has projected the worldwide unmanned aerial vehicles (UAV) market to double over the next decade. This means that the current worldwide expenditures of $6.6 billion are expected to exceed $89 billion within ten years. China plans on being part of this trend, and The People's Liberation Army (PLA) has an immediate vested interest in the military application of such technologies. Traditionally, the PLA has been a long-time supporter of UAV technologies and has partnered with such firms as the Aviation Industry Corp of China (AVIC) to both reverse engineer and develop their own UAV related technologies.

Not surprisingly, the outcome of these domestic Chinese efforts can be somewhat surprising to outsiders. Until photos recently proved otherwise, it was believed that the Chinese did not have the technology or expertise to operate an unmanned helicopter with the ability to vertically takeoff and land (VTOL) on a sea based platform. While the exact technical specifications for this particular UAV are unknown, it is known that very few countries are capable of building a UAV with VTOL. This past year, Italy -- a longtime NATO member with a very modern military -- tested an Austrian manufactured drone called the S-100 for the first time on one of their warships with VTOL capabilities. Because of the way military systems evolve (historically and politically), it is suspected that the Chinese will soon have larger versions of their unmanned platform which, similar to the S-100, can be used for reconnaissance, transmission relay, target acquisition and real-time surveillance. Larger models in turn can also carry missiles and munitions thus creating a flexible platform with both defensive and offensive capabilities.

China also tested another UAV called the Sunward Tech Star-lite SVU200 at the Beijing Air Show this past September. This showcase, which was performed on land, also confirms that the People's Liberation Army is moving forward with developing their own unique unmanned aerial platforms using applied technologies which can operate in a number of environmental conditions. Because China is taking a pragmatic approach, which maximizes platform flexibility while limiting financial cost, they are receiving a strong response from countries that also need the flexibility of an unmanned aerial platform but do not want to pay the cost typically associated with developing such platforms. Egypt, for example, recently signed an agreement with China to build twelve ASN-209 UAVs. This agreement includes a technology transfer component so that Egypt in the future can build its own domestic drone industry. The Chinese approach is in direct contrast with the US approach. The US approach in many cases increases development cost and also place significant constraints on the knowledge transfer of military technologies. In other words, when dealing with the US, you pay a lot of money to "borrow" the technology and are forbidden to peek under the hood. 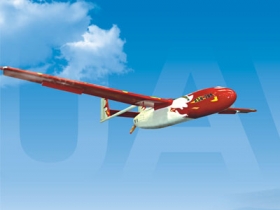 This Chinese strategy implies that they are using fewer proprietary technologies in their designs, which in turn reduces licensing and manufacturing costs. Detractors of the ASN-209 are quick to note that it can only operate for ten hours before being required to refuel.

However, the Chinese also point out that the ASN-209 costs 30 percent less to construct and maintain than a comparable US design while offering many of the same technical specifications.

The technical specifications, while not quite as advanced as some of the US drones, allow the ASN-209 to perform most of the same tasks. According to the ASN website, the UAV "can perform aerial reconnaissance, battle field survey, target location, destroy validation and artillery fire adjustment in day and night in real time" through data link and ground control. The system is comprised of "aircraft, airborne mission payload, GCS, launch and recovery equipment." The operating system is flexible due to the fact that no contact with an airport is needed, and the GCS allows multitasking and can be edited in real-time. As for the issue with refueling, the ASN Group recommends using two UAVs and switching them out when one reaches its 10 hour limit so that they can be used for 24 hours consecutively.

The UAV can reach a maximum speed of 180 kilometers per hour with a cruising speed of 120-140 km/h and a practical ceiling of 5000 km. It has a coverage radius and control range of 200 km and the maximum mission payload is 50 kg.

The ASN-209 can be deployed using a modified truck and is controlled using electronics equipment installed in a cargo van. This is a very practical system that reduces a purchaser's dependency on China for maintenance and/or parts in the future. This dependency factor is one of the perceived shortcomings of purchasing UAVs and weapon delivery systems in general from US Defense Contractors.

Last year, the United States Airforce, for the first time, trained more UAV pilots than traditional fighter and bomber pilots. Because of trends like this, the future for the aeronautics industry is tied to developments in the UAV market. The Chinese are taking a leadership in this area by innovating around designs that have immediate applied military value with none of the logistic dependencies historically associated with such systems. Their design specifications, while not possessing as many whistles and bells as other systems, are physically robust and technologically advanced. Innovation, as related to technical proficiency, is not traditionally viewed as domain explored by defense contractors, but the Chinese are showing this assumption to be incorrect by producing UAVs with comparable feature sets to their western peers but with significantly reduced development costs.