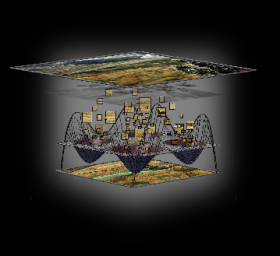 DARPA has recently taken a keen interest in the development of a new computer paradigm based on the re-introduction of previously dismissed analog microprocessor technologies. According to DARPA, along with notable academics from UC Berkley and Rice University, the problem with our existing digital processing technologies -- represented by the latest generation of microprocessor chips -- is that we obtain a high degree of precision at an enormous cost in electrical power.

Houston, we have a problem.

Even when operating in a "standby" state, a digital processor requires a constant and consistent amount of power because interference (most often environmental noise caused by the other internal components within the same processor) has to be addressed. Basically, power is used by the processor to maintain a minimal functional baseline which ensures the system performs when queried, as specified, by producing the most accurate and precise answers possible.
Interestingly, according to DARPA, precision -- long considered one of the most, if not the most, important metric -- for benchmarking processor performance needs to be reassessed as a metric of value.

Precision Has A Cost. 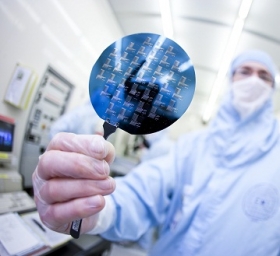 This relationship between accuracy and power, like the one with your ex-significant other, is a big problem. This holds true of the latest and greatest smart phones and it certainly holds true for the numerous portable technologies being utilized by the United States Department of Defense.

What happens when a digital microprocessor operates in an environment in which the power supply is limited? According to DARPA, bad things happen. Very bad things.

System failure is one potential scenario. Another undesirable scenario -- especially in military operations -- is increased response time. Calculations with a high degree of precision can be time consuming to solve. However, in this case, DARPA believes that while precision is important, it isn't everything. An analogy supporting their thinking would be to use 3.14 instead of 3.14159 (and so on) to represent Pi when computing the circumference of a circle. While using more digits creates a more precise answer, in most cases a "close enough" answer is just as good.

This means that DARPA is prepared to support the development of analog microprocessors that are less accurate than today's existing microprocessors and even on occasion provide the "wrong" answer.  Good Enough.

DARPA believes an acceptable trade-off can be discovered and that the answer lies in an overlooked technology from yesterday. DARPA has entitled this program UPSIDE, which stands for Unconventional Processing of Signals Intelligent Data Exploration. According to Daniel Hammerstorm, who is the manager for UPSIDE at DARPA, the objective is to create a new generation of analog based microprocessor that are power-efficient and that can provide accurate (but not overly precise) answers when processing data.

These analog microprocessors are probabilistic and, as the term implies, they create results which are statically somewhat accurate. A degree of inaccuracy is expected. This sort of energy efficient architecture would be especially useful when dealing with the volumes of image data being collected by surveying airships, drones, planes and helicopters being used by the United States military both abroad and also in our domestic airspace.

The less precise data can be quickly vetted while still providing insights and, in many cases, brought to the attention of a human operator who can make an immediate judgment call on the data using their own insights. This sort of balance, an acknowledgement of many best practices from the human-computer-interaction discipline, leverages the raw power of the analog processor with the natural cognitive abilities of a human. Interestingly, this is the approval workflow being utilized by most unmanned drone operations prior to green-lighting a weapon strike, less the analog microprocessing component, of course.

Even with the development of such chips there are numerous considerations that can affect the success of a new microprocessor. One of the largest hurdles, which also means one of the largest opportunities, involves software. Software will need to be designed and redesigned to run in an optimal fashion on an analog processor. As a matter of fact, one of the biggest criticism that chip maker Intel has had of Microsoft over the past decade is that the Windows operating systems quickly offsets the gains made by Intel's new processors. To paraphrase Wirth's Law (in the words of an Intel engineer), "What Intel giveth, Microsoft taketh away."

The Future: Concise and not Precise.

Ironically, precision and the demands precision places upon our power sources -- take batteries for example -- is now becoming a problem. DARPA believes that concise information rather than precise data is the more desirable outcome in numerous situations, especially those involving visual data. This new perspective - which removes a sacred cow by pushing back on the metric of precision -- will result in a new generation of mobile and portable technologies that are more energy efficient than their predecessors.