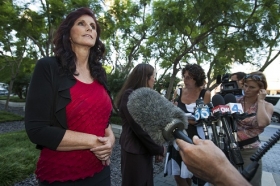 Third-party content is the driving force of the Internet. While you can get media off of official websites and the like, your go-to place to find media is likely on a third-party host. Think places like YouTube, Vimeo or even Google Image Search. When you're looking for high-res photos of Justin Bieber or Lady Gaga live videos, chances are you aren't hitting up the official site, but rather one of these third-party providers.

The responsibility of third-party providers to police their own content has been a hot button issue of IP law for as long as there have been such providers. Copyright holders demand that their copyrights be enforced. Third-party media providers claim that it's not their job, or at least that they can't be reasonably expected to police every piece of content that gets uploaded. With 72 hours of video uploaded to YouTube every minute, it hardly seems reasonable to expect them to patrol everything that gets posted.

However, in recent weeks the responsibility of third-party content hosting services like YouTube to control what gets posted has taken on a new life. It's not about IP. Rather, it's about the actual content itself and whether or not YouTube has a responsibility -- moral or legal -- to remove content that is inflammatory or violates local laws.

First, there was Innocence of Muslims video, which allegedly inflamed riots against the United States throughout the Arab world. YouTube revoked access to the video in Egypt and Libya, putting it in the same category as the governments of Iran and Afghanistan, both of whom banned the video. Many people called for the removal of the video from YouTube, as if the solution to the problem were less speech, not more speech, and as if murder and rioting were an appropriate response to hurt feelings. The uprisings have led to a call in the Islamic world for tighter anti-blasphemy laws -- in effect laws that would criminalize anti-religious speech. 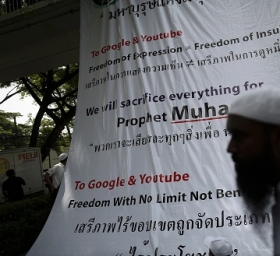 Less well-known was the recent case of a Google executive in Brazil. Fábio José Silva Coelho was detained by federal authorities in Brazil due to a video posted on YouTube. A state court in São Paulo had previously demanded that YouTube remove Innocence of Muslims. Coelho, however, was detained by Brazilian authorities in relation to a video which alleges that a candidate for mayor demanded that his lover get an abortion and that makes public the details of a paternity suit involving said candidate. The video allegedly violates a 1965 Brazilian law that makes it illegal to "offend the dignity or decorum" of a candidate for public office.

The desire for governments to restrict free speech is nothing new. Nor, for that matter, are govermments attempts to repress free speech by going after the content provider rather than the content creator. Take as an example The Pentagon Papers. However, blaming third-party content hosts for their content takes things to another level. A more apt analogy would be the Nixon Administration attempting to bully and intimidate the printing presses used by the New York Times rather than just the newspaper itself. Indeed, YouTube, Vimeo and other third-party content hosts have precious little control over what appears on their sites.

Nor, it seems, should they. In both cases cited above, there seems to be little more than a case of bruised and damaged egos. With regard to defamatory writings, there is always tort law to go after those who disseminate lies and misinformation with the intent to cause harm to the reputation of another. The actors in Innocence of Muslims might have a case for damages if they were, as they allege, misled about the project. However, states as actors don't seem to have a reasonable interest in suppressing free speech.

The question boils down to the age-old one: What is the solution to speech that we disapprove of? Is it to suppress that speech or counter it with more speech?

The governments of Brazil, Egypt and Libya have had their say on this. I will count myself among those arguing that the light of truth is the best and most powerful antidote to speech that I personally disapprove of.