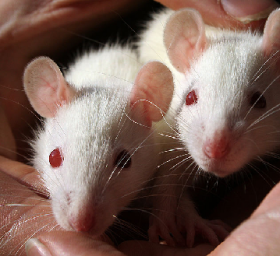 Any bodybuilder knows that building muscle requires exercise to encourage the muscles to grow. Now, scientists at Wake Forest Baptist Medical Center have determined that exercise is a critical step in building a lab-created muscle-like implant designed to repair serious muscle damage.

The researchers, part of Wake Forest’s Institute for Regenerative Medicine, have tested the implants in mice and found that they successfully spur the mice’s bodies to regenerate and repair muscle tissue, resulting in significant functional improvement. Eventually, the technology may help to repair muscle damage due to such conditions as hernias and cleft lip and palate.

“Current treatment for volumetric muscle loss (VML) injury involves surgical muscle transfer, although these procedures are often associated with poor engraftment and donor site morbidity,” the researchers wrote in the June 2012 issue of Tissue Engineering. “Physical therapy is also used to improve the strength of the VML-injured muscle or muscle unit, although this treatment alone may have a limited ability to significantly restore muscle mass or function.”

In cases of muscle injury or disease, the human body normally can rebuild small defects. However, if large muscles are injured or must be removed, the body can’t replace those. Physicians can move muscle tissue from one place in the body to another surgically, but “this is like robbing Peter to pay Paul,” says George Christ, Ph.D., lead author of the study. “Rather than moving existing muscle, our aim is to help the body grow new muscle.”

Such techniques could help in muscle loss injuries and in other conditions, such as in hernias or in cleft lip and palate, a relatively common birth defect where there is a gap in muscle tissue needed for normal facial development, the researchers said. Prior experiments have shown in mice that it’s possible to take muscle cells seeded on a bioengineered platform and use them to restore some functional capacity, but “there is still significant room for therapeutic improvement,” the researchers wrote.

In this experiment, the scientists placed cells derived from mouse and rat muscle tissue on a strip of biocompatible material derived from pig bladder with all cells removed. This type of bio material is known to be compatible with the body, and the cells were loaded onto it at a rate of 1 million per square centimeter. 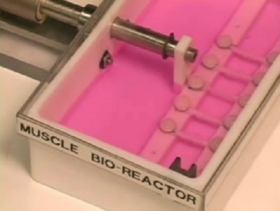 Next, some of the strips were exercised – i.e., they were placed in a computer-controlled device that slowly expands and contracts, much like normal muscle tissue. The idea was to “educate” the implants on how to perform in the body, and the cyclic stretching and relaxation occurred three times per minute for the first five minutes of each hour for about a week.

For this set of experiments, the scientists compared four groups of mice which had been surgically altered to remove about half of a large back muscle – the latissimus dorsi – in order to create functional impairment.

The bioengineered muscle strips are not truly muscle when they’re implanted in the body, according to the researchers; they need time in the natural incubator of the body in order to develop sufficiently to function as muscle. The project’s goal was two-fold: the researchers wanted to see what process or implant best speeds up the body’s natural recovery process, as well as the process that most effectively prompts the development of new muscle tissue.

They found that exercise helps prompt the implants to move the recovery process forward. “The implant that wasn’t exercised, or pre-conditioned, was able to accelerate the repair process, but recovery then stopped,” Christ said in a statement. “On the other hand, when you exercise the implant, there is a more prolonged and extensive functional recovery. Through exercising the implant, you can increase both the rate and the magnitude of the recovery.”

A test of muscle force at two months post-implant showed that animals who received the implants with extra cells added had a threefold increase in absolute force when compared to animals whose muscle damage was not repaired. This produced muscle force at 70% the power of so-called “native tissue,” or the original, undamaged muscles. The animals that didn’t receive any muscle repair had muscle force of 30% after two months.

The results also indicated that new muscle tissue developed both in and around the implant and in the area where the implant contacted the native tissue, indicating that the implant worked to prompt the body’s natural healing process.

The researchers eventually hope to evaluate the treatment in patients who need additional surgery for cleft lip and palate. Children with this birth defect usually need multiple surgeries to move muscle to the lip area and stretch existing muscle to cover the gap, and the implant evaluated in the current research is almost exactly the right size for those surgeries, making it a real potential boon for these children, Christ says.