Surgeons at the University of Maryland School of Medicine performed the first successful porcine (pig) to human heart transplant, a procedure referred to as “xenotransplantation.”  The patient, 57 year old David Bennett, was recovering and doing well three days after the procedure.  The surgical team continues to monitor Mr. Bennett’s condition.

According to Bartley P. Griffith MD, a member of the surgical team that performed the xenotransplantation:

According to organdonor.gov, “about 110,000 Americans are currently waiting for an organ transplant, and more than 6,000 patients die each year before getting one.”

The surgical team spent years refining the technique in primate studies, waiting until they saw good survival over 9-12 months without organ rejection and low infection incidence before applying for the compassionate use exemption from the FDA that allowed Mr. Bennett to receive the xenotransplantation, according to surgical team member Christine Lau MD. 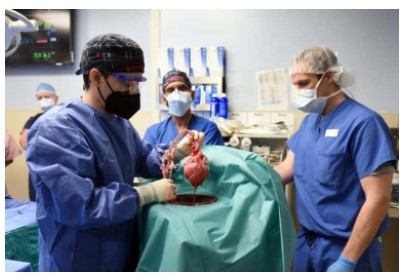 The donor heart was provided by Revivicor (acquired by United Therapeutics in 2011).  Ten genes in the donor heart were genetically modified, primarily to reduce the chance that Mr. Bennett’s body would reject the donor organ.

This is the second xenotransplanted organ provided by Revivicor in the last six months.  In October 2021, surgeons at New York University attached Revivicor’s genetically modified porcine kidney to the blood vessels of a brain dead patient on life support without any signs of rejection for over two days.  The xenotransplanted kidney functioned normally during that time period.

According to the University of Maryland School of Medicine’s press release, xenotransplants were first tried in the 1980s.  However, they fell out of favor after a xenotransplantation of a baboon heart into an infant in California failed due to the immune system’s rejection of a foreign heart.  In contrast, xenograft porcine heart valves have been used as valve replacements in humans for over 50 years, and xenograft valve replacements are still in use today.

This video includes more information about Mr. Bennett’s procedure and is available from the University of Maryland School of Medicine.