Search
James Lee PhillipsSep 9, 2012Science and Technology
For Amazon, Everything is Fuel for Kindle Fire

Amazon does many things well, and occupies an enviable position in several markets. Thursday's event debuted several new Amazon products and services, but the most fascinating revelations may come from reading between the lines of the press releases, and looking between the far-flung categories of Amazon's many product offerings. 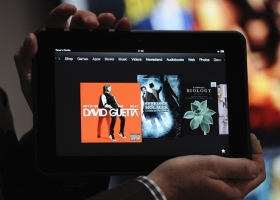 Starting with the specs

Obviously, Thursday's event featured two variations of the new Kindle Fire HD 8.9" tablet, along with a new HD version of the 7" Kindle Fire -- newsworthy enough in its own right. For that matter, it's worth at least a raised eyebrow that the original "iPad killer" Kindle Fire has been trimmed in price and given a significant boost in speed and battery life. But the star of Amazon's latest show is undoubtedly the 8.9" slab, which, according to the company, "isn't just the best tablet for the price, it's the best tablet." Well, they would say that, wouldn't they? Without sounding too much like a fawning press release, I'll be happy to agree that Amazon has created a compelling entry for the tablet market... without necessarily needing to undercut price in order to make it attractive. On the hardware side, the resolution, audio (Dolby Digital Plus is a mobile first), computing power, wireless power (MIMO, another mobile first), and pure form factor make the 8.9" Kindle Fire HD similar enough to compete, and unique enough to distinguish. However, hardware advantages and unique features are fleeting, and rarely turn into enough to make your product a game-changer (as Samsung and Asus know all too well).

The LTE version of the 8.9" tablet has a linked (but not included) subscription plan, which seems odd to me -- although I'm not sure why. The tablet's extra functionality is useless without the service, and the $50 yearly subscription is only applicable for that specific device. But we could hardly expect it to be included in the tablet's purchase price (or could we?). It seems like a good deal overall, but 250MB per month is rather meager no matter how you look at it, especially with LTE-driven express connections to Amazon's media repositories. Perhaps Amazon is looking forward to juicy overage charges as well. The subscription service highlights the one omission at Amazon's event -- well, not an "omission" as much as an unmet expectation. Namely, the rumored Amazon smartphone did not appear. LTE is an obvious connection, but it will need to take a very different form to support daily data consumption and voice needs. Still, the Kindle Fire LTE can be seen as a sign that all of the concerned parties are in the final stages of development. 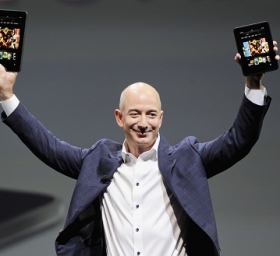 For all of its virtues, Amazon is not Apple. In fact, Amazon is not "even" Microsoft. This explains why Amazon's event lacked much of the sleek trappings and capacity crowd attendance of an iPad release, or the fevered sneak preview feel of Microsoft's LA unveiling in June. But make no mistake, a new Amazon tablet is a Very Big Deal -- at least Surface big, and probably more than Nexus big. Jeff Bezos will be the first one to tout the hardware features, but the benefits are something completely different. According to Bezos, "Kindle Fire is a service." Somewhere between the tangible realities of hardware and the meaningless value of a brand lies "the service". It's the holy grail of a modern technology company; it's why Google wants to be more than Googling, why Microsoft is almost ashamed of calling their new operating system "Windows," and why just about everyone wants to be more like Apple. It's an integration of both obvious pairings and disparate products. Obvious pairings If you weren't paying close enough attention, Amazon also released the compelling (albeit more purpose-built) Paperwhite e-readers, AND dropped the price of the entry-level (ad supported) Kindle down to $69 -- if nothing else, it makes a nice stocking-stuffer for someone who would prefer to keep the iPad out of the bathroom. Nobody, least of all Amazon themselves, is forgetting that books are to the company as Search is to Google, or Windows is to Microsoft. In Amazon's case, it's a microcosm of the larger hardware-driving-content strategy. It's also an acknowledgement that the Kindle has been Amazon's best-selling product, ever. The bulk of the event touted services that were designed with books and readers squarely in mind. There was Kindle Direct, Kindle Serials, Kindle Singles... and the more device-oriented services such as WhisperSync and Immersion Reading. These features allow you to switch back and forth between reading and listening to your e-book, as well as saving your place in the book when you go from one supported device to another. FreeTime is a nice solution for parents who hand over their Kindles to children (for example, one touch and 50 Shades of Grey is off-limits, and time limits are set for various other kinds of tablet uses). Perhaps more interesting is the X-Ray suite of services, which allow you to get extra information while you're reading (via Internet-powered annotations) or watching video (via IMDB). Interestingly, the e-book annotations are linked not only to Wikipedia, but also to Shelfari -- Amazon's own book-specific wiki, and therefore yet another little piece in the company's increasingly integrated puzzle. When it comes to video, however, the X-Ray application opens the door to a number of other considerations: Amazon Prime on one side, and IMDB on the other. This has nothing to do with Amazon, the good ol' bookseller, a brand image that has persisted despite being largely outmoded since at least 2003. This is about shopping around, and finding that the best deal is already right where you happen to be.

Amazon is taking a middle road between Apple's walled garden (or gated community?) and Android's melting pot. Amazon has its own answer for almost every mobile need, yet plays well enough with others (just ask Facebook, which got its own version-specific Kindle Fire HD app). You don't HAVE to stay with Amazon-only solutions while you're fondling your Kindle... but those solutions make sense, they satisfy, and they give you a little bit more for your brand loyalty. Compare the Kindle tablet to Google's Nexus 7, which is equally compelling in specs, competitively priced, and has built-in integration with Google's media, app, and cloud services. Conversely, despite the investment and potential benefits of success, Nexus is largely irrelevant to Google's overall future prospects. Compare Kindle to Surface, which is likewise designed to showcase Microsoft's new "ecosystem" with a cutting-edge product that exploits consumer familiarity. But, like the Nexus, the Surface is appearing in a decidedly non-retail context. Google and Microsoft don't really SELL stuff, and even Apple envies how well Amazon is set up (it was the Kindle Fire that changed Cupertino's mind on the prospects of a 7" tablet, after all). When all the pieces are in place -- and the Kindle Fire HD 8.9" could very well be the keystone -- Amazon will have more useful pieces on the market chessboard than anyone else.

Apple led the way, Google nipped at their heels, and Microsoft seems to be chasing the pack (putting nearly everything they have into whatever the market trends tell them that the favored breakthrough product should be, whether it's Xbox, Zune, Windows Mobile, Metro, cloud, enterprise, etc). Amazon is virtually the only big tech company that can succeed by waiting and developing a variety of offerings, while slowly using its bookseller / retail center to draw tighter the wide net. Amazon's big picture is drawing ever closer to integration. Just as Microsoft endured initial Xbox losses, Amazon is reaching past the thorny loss-leader tablet sales to grab the ripe fruit of media, apps, subscriptions, cloud storage, and more. Considering that Amazon's initial success was based on weathering losses, it's clear to anyone that Bezos knows better than anyone how to look beyond a horizon drawn in red ink.