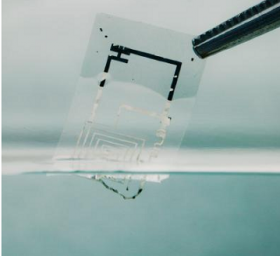 In many ways, we are living in a golden age of electronics and technological innovation, including science, medicine and the gadgets that comprise our daily lives. The average United States household had 24 electronic gadgets in 2011.  The downside to being so plugged in is an environmental catastrophe, both in terms of usurped electricity and the waste (e-waste) that accompanies the life cycle of these products.  The UN Environment Programme estimates that worldwide e-waste could be as high as 50 million tons per year.  But with electronics appetites growing in traditionally blacked out places like rural China and the Third World, the problem of e-waste disposal in a world with finite landfill resources is one we will have to confront soon.

New research published in Science Magazine out of a triumvirate of institutions (University of Illinois, Tufts University and Northwestern University) is confronting the aforementioned problem head-on, and bringing joy simultaneously to tech geeks and environmentalists.  Composed entirely of silicon, magnesium and silk, the team constructed a new class of “transient electronics” that are tuned to last a pre-determined amount of time (days, weeks or even years!) before disappearing.

“This is a huge step. It is a pinnacle,” says materials engineer Mihai Irimia-Vladu of Johannes Kepler University in Austria. “It’s a very elegant demonstration of making functional devices that are biodegradable.”

The magnesium and semiconducting silicon act as the hardware and perform semiconducting tasks, while silk acts as the packaging and scaffolding.  The silk is liquefied before the devices are constructed to manipulate concentrations of various proteins, and the outer thickness is then used to determine the ultimate lifespan of the devices.  Rates of chemical reactions such as solubility and diffusion are calculated to establish a balance between the three primary components of the devices.

One of the advantages to this ability to manipulate dissolution is that devices can be tailor-made for specific application time frames.  "The different applications that we are considering require different operating time frames," said lead researcher John A. Rogers. "A medical implant that is designed to deal with potential infections from surgical site incisions is only needed for a couple of weeks. But for a consumer electronic device, you'd want it to stick around at least for a year or two. The ability to use materials science to engineer those time frames becomes a critical aspect in design." 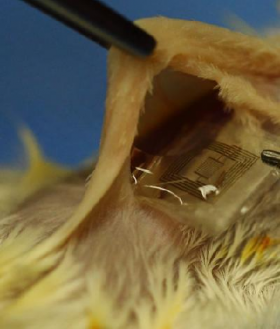 Partially sponsored by DARPA, one of the advantages to ‘transient electronics’ is the ability to utilize the technology for military or covert operations.  Gadgets for sensitive intelligence gathering could be programmed to dissolve along the timeline of the mission.  A group of environmentalists monitoring an oil spill could program sensors to expire within the time frame of the expedition.

Safety concerns about the devices are mitigated by use of materials that already exist in the body (or easily dissolve therein).  Silk is known for its safety and is already in use for wound treatment and healing.  The amount of magnesium used in the majority of devices is less than the amount in a daily vitamin.  Silicon has long been studied for its potential as a drug delivery vessel.