While GOP candidates won't stop publicly disavowing it, all eyes are on the Republican platform. The convention, which closed Thursday, inserted a number of controversial planks regarding abortion, English-only laws and a committee to examine the possibility of returning to the gold standard. Receiving considerably less attention was the downright Orwellian naming of the "Internet freedom plank," which opposes net neutrality.

Unsurprisingly, the Republicans are looking to remove regulations in the telecommunications industry. Specific regulations are not mentioned. Perhaps more surprisingly, particularly from the party of the USA PATRIOT Act, is a promise to protect your private data from the prying eyes of Big Brother. The Obama Adminsitration's stance in favor of net neutrality is derided as "frozen in the past."

The Republican's telecommunications plank found an unlikely group of supporters in the Motion Picture Association of America. It's the rare Republican presidential candidate who can get through a primary without attacking Hollywood at least once. But Chris Dodd, former Democratic Party presidential candidate and current head of the MPAA, was effusive in his praise for the Republican platform, stating that "The Republican Party platform... emphasizes the importance of us doing more as a nation to protect our intellectual property from online theft while underscoring the critical importance of protecting internet freedom."

IP was not mentioned specifically. However, the platform did allude to it tangentially in a plank regarding international trade with China. 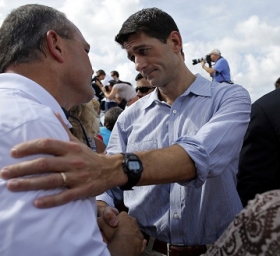 The platform is generally short on specifics, a charge that has been leveled at the Romney campaign since it began six years ago. However, it stands in stark contrast to past Republican support for bills like SOPA and PIPA. The Republican Party will also be opposing CISPA.

The entertainment industry and Big Data aren't just some other Democratic Party constituency. Indeed, they are jewels in the crown of the Democratic Party's traditional donor base, along with unions and attorneys. This adds an additional layer of strangeness to this plank in the Republican platform. While the trend in telecommunications is toward less privacy and more government monitoring regardless of which party runs Washington, the Republican Party traditionally pushes for closer monitoring of telecommunications in the name of fighting the War on Terror.

It will be interesting to see how the Democratic Party reacts, if at all. While a strong statement in favor of ending the hunt for Internet pirates is, of course, off the table, the Democratic Congressional Caucus has showed some support for CISPA. The president has opposed the bill, causing some Congressional Democrats to look for ways to amend it to get Mr. Obama's signature. Does this mean that the Democratic platform will include a plank supporting some altered form of CISPA in the name of "Internet freedom?" Or will the Democrats go to the left of Republicans, including stronger language opposing things like data mining?

In truth, the answer is probably the former. While the Democrats are traditionally the liberal party in the United States, there seems to be a bipartisan consensus in Washington that there can be too much of a good thing: And Internet freedom is just such a thing. Sadly, there does not seem to be a significant constituency for true Internet freedom anywhere in the mainstream American political spectrum.