Jane AndersonJun 20, 2012Science and Technology
High-Capacity Highways in the Brain 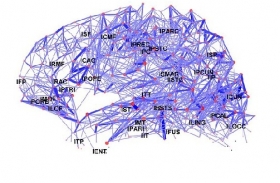 Imagine the human brain as akin to the interstate highway system, with neural pathways as feeder roads that direct much of the traffic into select hubs that are interconnected by longer, higher-capacity passages. Scientists at Indiana University and the University Medical Center Utrecht in the Netherlands say this scenario actually occurs, and these hubs and their interconnectivity serve as the backbone for global brain communication.

Their study, published online June 18 in the early edition of the Proceedings of the National Academy of Sciences, show that this network of hubs form a “rich club” within the human brain, and these rich club connections make important contributions to signaling between different regions of the brain.

“Until now, no one knew how central the brain’s rich club really was,” Olaf Sporns, professor in the Department of Psychological and Brain Sciences at Indiana University-Bloomington, said in a statement. “It turns out the rich club is always right in the middle when it comes to how brain regions talk to each other. It absorbs, transforms and disseminates information. This underscores its importance for brain communication.”

The research performed by Sporns and his colleague Martijn van den Heuvel, a professor at the Rudolf Magnus Institute of Neuroscience at University Medical Center Utrecht, builds on previous work from the two showing that not all regions of the brain are created equal. Some regions, in fact, are much “richer” in terms of linkages and connectivity, and exchange information much more intensively than other regions.

Scientists have mapped out the different regions in the human brain and determined the functions of each region. For example, the cerebrum encompasses the frontal, parietal, occipital and temporal lobes and controls behavior, senses, language and some memory. Meanwhile, the cerebellum controls balance and centers for the respiratory and cardiovascular systems, while the brain stem controls hormonal body processes, the spinal cord, temperature regulation and the optic nerve.

However, the research from Sporns and van den Heuvel casts the brain as an integrated system that operates as an overall network, not as individual neurocenters. Last November, they released a study identifying a group of 12 strongly interconnected bi-hemispheric hub regions that they dubbed the “rich club.” The regions comprise the precuneus, superior frontal and superior parietal cortex, as well as the subcortical hippocampus, putamen and thalamus.

This most recent study is part of an ongoing project that seeks to map the networks of the human brain, focusing on the role of the rich club.

Communication paths spanning long distances typically involve a sequence of steps that start at local connections and then move across feeder, rich club, feeder and back to local connections, the study said. In addition, 69% of all minimally short paths between node pairs traveled through the rich club, even though the rich club network accounts for only 10% of the brain in volume.

“The topology of the brain’s network appears to be organized to create a focal network through which most of the brain’s long-distance signal traffic must pass,” the study’s authors wrote. In fact, the cortical rich club may “constitute a central network that not only attracts and propagates, but also transforms and integrates global signal traffic.” 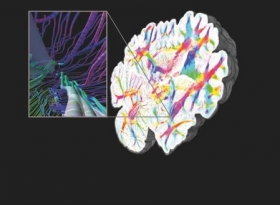 If these pathways are disrupted by injury or illness, that could have a significant impact on the brain’s functional integrity, the study said.

Future studies examining the connectivity of rich club regions hopefully will serve to characterize the role of the rich club in the integration of information across function subdivisions of the human brain, the researchers wrote.

Meanwhile, other researchers are seeking to explore the structure and pathways in the human brain; neuroscience research eventually could uncover causes and treatments for conditions such as autism, Alzheimer’s disease and multiple sclerosis.

For example, researchers from the Julich Institute of Neuroscience and Medicine at Germany’s Forschungszentrum Julich said this week that they are using graphics processing units (GPUs) supplied by computer graphics supplier NVIDA Corp. to accelerate by as much as fifty times the reconstruction of histological brain sections necessary for the rendering of a high-definition, structurally accurate and realistic model of the human brain.

To build the model, scientists are reconstructing images of microscopic tissue structure, magnetic resonance images and images from a 3-D polarized light imaging technique developed at the institute. Their eventual goal is the world’s first “micro-atlas” of the human brain.