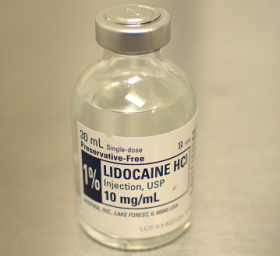 ACTION:  Infringement of U.S. Patent 5,827,529 (referred to as “529 Patent) by Noven Therapeutics/Noven Pharmaceuticals, makers of products such as the ADHD drug Daytrana, at a considerable harm to the transdermal drug delivery technology company Teikoku Seiyaku, Co., Ltd., holders of the patent, and Endo Pharmaceuticals, manufacturers of a 5% lidocaine patch that relieves pain associated with post-herpetic neuralgia utilizing technology covered by the patent.

The chronology of events is as follows.  On October 27, 1998, US Patent no. 5,827,529 was issued to Teikoku Seiyaku Co., Ltd. for their submission entitled “External Preparation For Application to the Skin Containing Lidocaine.”  On March 19, 1999, the FDA approved an original New Drug Application (NDA) by Hind Health Care Inc. (which has since been acquired by Teikoku Seiyaku) for the Lidoderm Patch based on the “529” patent technology.

Every year, 500,000 cases of herpes zoster (shingles) occur, resulting in a painful rash (or multiple rashes) that subside in 2-3 weeks.  In 20% of patients, a very common complication is the aforementioned post-herpetic neralgia (PHN), a disorder characterized by pain along a cutaceous nerve region of a previous shingles breakout.  The condition is chronic, lifelong, and extremely debilitating, with each highly painful episode lasting approximately 30 days.  The Lidoderm patch, which Endo Pharmaceuticals is exclusively licensed to produce and sell, slowly releases subcutaneous doses of lidocaine to PHN patients, literally restoring their lives.

The FDA approval process is bifurcated

along novel drugs and generic drugs or variations based on existing approved medications.  New drugs must be approved with a form called a New Drug Application (NDA), which lays out all the scientific research and clinical data undertaken in developing the drug, as well as any patents that the drug is based on.  This becomes the drug’s so-called “orange book,” a quick reference for any future patents or approvals that must reference the original drug.  A somewhat shorter process is undertaken for generic drugs, only requiring an Abbreviated New Drug Application (ANDA), which only shows that the drug is bioequivalent to an approved listed/branded drug.  The caveat is that applicants for an ANDA must provide notification to any patents in an “orange book” that are referenced or addressed to make sure that no infringements are occurring of the owners’ patent(s).

The primary focal point of the lawsuit by the Plaintiffs (Teikoku Seiyaku and Endo) is that the Defendants (Noven Pharmaceuticals) submitted or cooperated in submitting to the FDA paperwork constituting an Abbreviated New Drug Application (ANDA) seeking approval for a generic 5% lidocaine patch that mimics their Lidoderm patch. Noven claimed that their manufacture and sales of the drug wouldn’t infringe on the ‘529 patent, but since notifying Endo and Teikoku of their plans to file FDA approval has barred the pharmaceutical patent holders from any access to their FDA ANDA submission.  The Plaintiffs felt that there was no other way to gain information regarding the Novo 5% lidocaine patch within the 45 day statutory evaluation period than a pre-emptive lawsuit. The Plaintiffs also claim that Noven Pharmaceuticals must have had knowledge about their patent, because they referenced it in their ANDA application.

In filing this suit, Endo Pharmaceuticals and Teikoku Seiyaku Co., Ltd. are taking advantage of the Hatch-Waxman Act, which allows a current patent holder the right to commence a pre-FDA approval lawsuit in the United States.  Among various fees, the patent holders are seeking: 1) a court ruling that Noven Pharmaceuticals, Inc. has violated the ‘529 patent with their genetic lidocaine patch; 2) an order forbidding FDA approval of the generic patch; and 3) a court-mandated injunction to manufacture, distribute or sell the product proposed under FDA Abbreviated New Drug Application No. 20-3265 before the expiration of the ‘529 patent.

Enjoyed this article? See the latest in our Newsfeed.