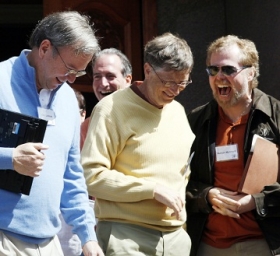 Intellectual Ventures paints itself a champion of innovation and a liberator of inventors. More and more detractors consider the patent private equity firm steered by polymath Nathan Myhrvold a giant patent troll. Not long ago, Intellectual Ventures was being viewed as something different, something curious and in between, an oasis where inventors get paid and inventions are equity. A magical place where labs, lawyers and licenses form a collective and share in the riches of something called invention capital. But with the patent wars reaching a fever pitch, and patent reform debates raging harder, Myhrvold’s vision of a new asset class for intellectual property is starting to fade behind Texas and Delaware courthouses filled with specious claims of infringement.

Although Intellectual Ventures has spearheaded enough patent infringement suits to be labeled, in some circles, a patent troll, Myhrvold rejects the accusations and chooses instead to be thought of as an investor in invention. Really, separating invention from production and marketing. Building a destination to buy patents direct from the factory. At the same time, creating a unique market vehicle that protects and rewards those toiling away in garages and university labs, building the future and not getting compensated for it.

But many patent experts and financial analysts aren’t buying it. If Myhrvold’s business model is going to work, they say, patent trolling and infringement suits may be the only way to cover the current gap in IV’s multi-billion dollar investment funds. In other words, start suing the pants off of any startup, corporation or private entity making things vaguely resembling one of 30,000 or so intellectual property assets amassed by IV since Myhrvold started the company in 2000.

Pushing 2011, Intellectual Ventures looked every bit the visionary and altruistic business partner it claimed to be. Then, according to IPWatchdog, “Intellectual Ventures did what they said they would never do, but which so many feared they ultimately would do.” They took off the kid gloves and dropped three individual patent infringement cases in the U.S. District Court of Delaware. The targets, although notable, seemed immaterial at the time. The takeaway being our giant, wealthy friend of inventors and investors was now following the well-worn path of patent litigation. If invention was Myhrvold’s flagship product, then shaking down companies not willing to license with Intellectual Ventures seemed hypocritical and frightening at the same time.

In some ways, Intellectual Ventures operates under a veil of secrecy. Those tied to IV are reportedly hooked into an airtight non-disclosure agreement. Critics intimate IV simply wields too much power and tight lips ensure some degree of freedom from becoming a target. The founder is eccentric and unpredictable. Myhrvold studied with Stephen Hawking, authored a $625 cookbook, and sued one of his own investors for infringing on an IV patent.

Intellectual Ventures is also unorthodox and difficult to value. Myhrvold is quite the pitchman, having raised approximately $5 billion from the likes of Amazon, Apple, Intel and Stanford University. According to Forbes Magazine, IV funds carry up to a 20-year payback window, or the life expectancy of a patent. Disturbing to average investors because even private equity typically works in 10-year cycles. Meanwhile, two funds are producing a negative internal rate of return and Myhrvold is in the back of the lab making ketchup out of mushrooms. Outside of protection, what if there is no real market for patents and invention capital is a failure?

Some analysts suggest there may be only one way out.

Fast forward to 2012 and Myhrvold doesn’t apologize for IV’s newer, in some eyes polluted, revenue stream. He positions patent litigation as an inevitable course of action when defending the inventor, the little guy, in today’s ever-litigious environment. Lawyers and complaints become more of a natural extension of his business model, than the mark of a traditional patent troll with nothing to lose and no stake in innovation. And Myhrvold, with his nutty professor charm and Microsoft pedigree, can be very convincing when selling Intellectual Ventures and its pioneering attitude.

Myhrvold compares invention capital to the early days of both venture capital and private equity, when distrust and contempt smothered any real genius or social benefit. “You have to be willing for people to ridicule you and call you names. And most great endeavors have exactly that,” Myhrvold told an April gathering at the Pacific Science Center in Seattle. He added that big tech companies like Apple are some of today’s most active litigants, illustrating his conviction that patents are worth fighting for. And according to Myhrvold, this corporate flip-flop is not only a turn to his way of thinking, but also vindication for IV’s road less traveled.

Myhrvold doesn’t shy away from naysayers, and seems comfortable being the most unpopular person in the room. But his rhetoric and revolution isn’t exactly sweeping that segment of the patent nation convinced trolls have broken the system and IV’s litigation strategy serves more to stifle innovation than inspire it.

So despite what story Myhrvold spins, or how many patents his lab produces, or even the countless dollars IV claims to have pocketed for inventors, critics aren’t creating a special category for Myhrvold and Intellectual Ventures. Because beyond Apple securing its iPhone fort, or stockpiling patents for a rainy day, too many battles and settlements take place off the radar, in or out of a pro-patent court of law. And the losers are often the kind of upstart innovators IV claims to protect, or technology buyers simply caught in the middle.

At this point, Intellectual Ventures is not considered the protagonist it aims to be. Too many dark clouds bring IV closer to something some inventors should fear, not celebrate. And even closer to becoming a bad actor with the clout and muscle to become a bully when an alleged infringer crosses paths with IV’s vast patent portfolio.

Misperception or not, Intellectual Ventures can’t escape the patent troll stigma. And working under a one-of-a-kind model yielding, by most standards, puny returns doesn’t help the cause. But Nathan Myhrvold found a way to lock up big money, from big investors, for a big, long time. So until further notice, he will be in the lab kitchen cooking his invention capital dream up for anyone buying.