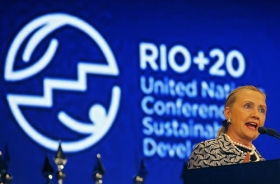 Richard Phillips, president of the Intellectual Property Owners Association, sent a powerful message to Washington the day before the Rio+20 UN Conference on Sustainable Development regarding the U.S. intellectual property community’s stance on sharing IPR with developing nations. Philips argued any language included in the Rio+20 final declaration compromising the existing IP regime would discourage investment and destroy trade secrets. “Any references to technology transfer should be clearly qualified and conditioned to include only voluntary transfer of IPR on mutually agreed terms.” The IPO has no interest in helping developing countries transition to a more sustainable economy if it means sacrificing valuable IPR. And the IPO’s chilly message set the tone for what many pundits and participants considered a disappointing Rio+20 conference yielding few substantive results.

Owning the majority of climate-related patents, companies in North America, Western Europe and Japan view intellectual property as a key driver to commercial innovation, and an immeasurable advantage in the green marketplace. Developing countries lack the research base and viable technologies required to build a green economy and hoped Rio+20 would create a new mechanism for technology transfer.

Developed nations hold the secrets and developing nations want access to them. And they don’t want to pay market rates. Both sides agree green innovation and technology are bridges to a more sustainable planet. But the U.S. and its Rio+20 allies remain defiant, not willing to surrender first-mover advantages in a nascent industry already subject to mercantilism and IP theft.

So in a fruitless effort, negotiators from over 180 nations handed attendees -- including 100 or so heads of state -- a 49-page document called “The Future We Want.” Watered down and vague, the text included “reaffirm” 59 times and reflected the contentious nature of the event. Nothing much got accomplished, and the sour outcome left doubts to whether big global conferences focused on the environment still serve a purpose. “The Future We Want” is a placeholder for the next world gathering, and does not contain the future developing nations want. 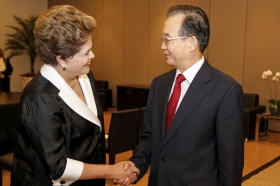 If Rio+20 was dead on arrival then what are the prospects for developing nations needing green infrastructure and financing -- and also IPR. The Group of 77 plus China represents the developing nations, and is looking for international support and consensus. Some members claim wealthier nations controlling technology created an environmental crisis and should bear the burden of mitigating it. And countries like the U.S. control most of the patents, create most of the greenhouse gases, therefore should provide critical resources for sustainable development across the globe. And technology transfer is central to the Group of 77 plus China’s argument.

Developing nations hoped Rio+20 would rouse the spirit of the 1992 Rio Earth Summit, considered at the time a boon for international collaboration and alignment on key environmental issues. Agenda 21 was a byproduct of the event and developing nations still rally around the technology transfer verbiage included in the document.

However, using Agenda 21 as a baseline for climate-related technology transfer can devalue intellectual property rights as a barrier to success. Clean energy infrastructure requires capital, local capacity requires skill, and innovation requires a host of conditions including education and investment. If those elements were manufactured -- or aided -- through tangible, subsidized resources, then how does a developing country acquire intellectual property, the missing link? IP has become a blood sport in tech-driven industries and IBM, Samsung and Apple don’t use it for gifts.

Assuming a green blueprint for a developing country, technologies in the public domain hold promise. Money, direction and joint planning from an international fund could power a startup industry or retrofit an old one. Future technologies could follow a similar path, with international support fostering an independent research environment, while allocating technology based on merit.

But patents are complex, litigious and carry a certain level of sanctity. Patents are also expensive for a developing country to buy or develop. To remove these obstacles, savvy Group of 77 leaders point to flexible terms in the WTO TRIPS agreement for issuing compulsory licenses. Compulsory licenses, in a broader context, are typically associated with extraordinary circumstances like a health-related epidemic. But the TRIPs agreement contains language commensurate with a developing country’s desire for climate-related, cost-prohibitive technology. Follow this logic and you no longer have to declare an environmental state of emergency to receive a compulsory license. Just claim the patent holder’s price is out of your budget.

This partisan strategy is an example of what makes the IPO go into isolation. Giving away any IPR that undermines the U.S. legacy of innovators and risk takers is taboo and threatens our competitive advantage of getting to market first and securing premium prices. Many climate-related technologies are immature, far from reaching market potential. For green investors and entrepreneurs, the financial upside is too great and the risk is exclusive. And green companies building industrial applications are not selling generic products.

Wires are crossed in this debate. A disconnect exists somewhere between capitalism and egalitarianism. Yes, Rio+20 spoke to the environment on a grander scale and the U.S. delegation may have missed an opportunity to exploit its IP advantage in a public forum, but green lines have been drawn and technology transfer will remain a combative subject.

The U.S. advocates investing in education, research, employees and -- of course -- embracing a free, open market buoyed by tempered regulation and protected intellectual property rights. The U.S. now becomes distant and noncommittal when met with global pressure from environmentalists, activists and events like Rio+20. In fact, President Obama chose campaigning over Rio while both German Chancellor Angela Merkel and British Prime Minister David Cameron stayed at home, too.

Technology transfer, in its purest, most profitable sense is proving to be non-negotiable. And China posing as a developing country does not elevate the Group of 77’s position in the eyes of those holding all the technology. Among the developing nations’ protests, feelings of oppression by the oppressor are becoming more commonplace. Accusations of imperialist motives by imperialist nations are growing. All of this rhetoric and propaganda may eventually reveal a different reality, a different objective for developing nations hamstrung by a lack of green know-how.

Everyone agrees certain targeted measures are necessary to ensure a more stable planet. And the U.S. does offer a solution rooted in private investment, market dynamics and self-reliance. But the U.S. thinks intellectual property and involuntary transfers of technology are incompatible, and the omission of more progressive text in “The Future We Want” takes climate-related technologies off the geopolitical stage for the foreseeable future.

Making a case for sustainable development, international agreements may no longer be galvanizing, relevant or binding. Developing countries could use an amiable push. And a greener economy based on market forces is a hopeful alternative. But at what point does intellectual property simply become foreign aid?

Tags
Intellectual Property IP rights patents IPO trade secret green technology green tech
Share
Previous Post
Next Post
Leonard PrietThe IP angle on the Rio+20 story is interesting, but I didn't hear about it at all in the news. Is this just a problem that the first world is ignoring because it doesn't really affect us?
Jul 2, 2012
Russell McOrmondThe United States did not honour foreign copyright while they were a developing nation. I do not see how having different levels of intellectual monopoly policy in different countries can ever be seen as a form of "foreign aid". Those taking risks based on the presumption of intellectual monopolies should not be presuming a global monopoly. In fact, they shouln't be presuming any specific monopoly in any country, given we may eventually move away from the presumption based to an evidence based policy setting to determine the right level of intellectual monopolies.
Jul 3, 2012
2nd Annual Patexia Mixer