Search
Brian HallMay 12, 2012Business
Is the age of ReRAM upon us? 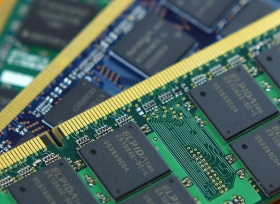 Toshiba invented NAND flash twenty five years ago. Today, flash memory is used in iPhones and iPads, and a myriad of mobile gadgets used by hundreds of millions of people -- at least -- around the world. Still a leader in flash memory, Toshiba continues pushing forward. The company recently received a patent for a ReRAM device that may soon replace both NAND flash and DRAM.  ReRAM (or RRAM, for resistive random-access memory) is a non-volatile memory type developed independently by several companies, including Toshiba, HP and others.

The market for ReRAM is heating up. In January, Japanese firm Elpida publicly claimed it had a working ReRAM prototype that was capable of switching state at 10 nanoseconds -- the equivalent to DRAM.  The company is working with Sharp to develop ReRAM chips for commercial use in 2013, although this may be impacted by persistent reports that the financially strapped Elpida will merge with Micron Technology. Numerous other companies are similarly building out their capabilities for ReRAM. Sony, Samsung, Panasonic, Micron and others are working to commercialize ReRAM. According to the EE Times, SanDisk recently let slip its interest in ReRAM by placing a job ad on its website for a ReRAM expert. Panasonic recently announced plans to go into production of ReRAM chips and HP has stated their intention to develop ReRAM-based products within the next couple of years.

Speed is the key

Flash memory is faster than hard disk storage, though significantly slower than RAM. It is less suitable for many of the processes required to effectively run programs. For this, DRAM (dynamic random access memory) is used. The issue with DRAM is ongoing power requirements plus loss of data when a device is powered off (or loses its power).

ReRAM may offer a better path. The goal for ReRAM development is a solution that is as fast as DRAM without sacrficing the retention of flash. ReRAM attempts to combine the read/write speeds of DRAM with the non-volatile nature of flash memory -- it ‘remembers’ the data even when power is turned off. Thus, affordable storage, including large-scale storage, at system memory speeds, is feasible. ReRAM promises faster, more energy efficient computing services and mobile computing devices. This could lead to a variety of improvements in cloud-based services and innovative form factors in personal computing devices.

However, Japanese firm Elpida, while achieving DRAM-like write speeds of 10 nanoseconds has not achieved DRAM-level endurance. Cost also remains a factor.  Nonetheless, industry-wide hopes remain that, as the BBC stated: “The next generation of RAM will combine the speed of power-hungry DRAM with the non-volatility of flash.”

ReRAM may achieve this goal. But it is not there yet. Consider Apple, which for years has pursued a strategy of focusing on lightweight mobile devices, is the world’s largest consumer of flash memory. At the end of 2011, the company paid $500 million for consumer-grade flash memory maker, Anobit.  Evidently, the leader in smartphones and tablets believes flash memory has a robust future.

Despite Apple’s purchase, however, ReRAM’s promise remains. Both flash and DRAM store each single bit as an electrical charge. ReRAM uses electrically-altered resistance. This means that required voltage is minimal compared to flash, and therefore offers benefits for the expected growth of low-power devices (and devices with new form factors).

ReRAM has advantages over other potential non-volatile memory competitors as well. As Wikipedia notes, compared to PRAM, ReRAM operates at a faster timescale (switching time can be less than 10 ns). ReRAM has a smaller and simpler cell structure compared to MRAM.

Who is in the lead? 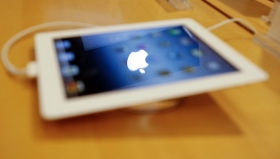 The promise of ReRAM is built upon the potential benefits over flash memory and DRAM. ReRAM could be to the future of mobile personal computing -- and cloud-based services -- what NAND flash has become to smartphones and ultrabook PCs. Several companies that are leaders in NAND flash and DRAM are pursuing the lead.

DRAM chip maker Elpida noted that their ReRAM prototype has a write speed of 10 nanoseconds and read-write endurance 10X better than flash. According to the company, their ReRAM prototype has a capacity of 64-Mbits and was manufactured using a 50-nm manufacturing process. Elpida is working with Sharp and both the National Institute of Advanced Industrial Science and Technology (AIST) and the University of Tokyo on their next-gen prototype. Their commercialization efforts are reportedly focused on smartphones, tablets and "ultrabook" mobile PCs.

Hynix is working on a commercial solution based on HP technology. Recently, flash memory leader Toshiba was awarded a US patent (08144494; published March 27, 2012) for a ReRAM “resistance change memory device.”

As PC sales stagnate and the rapid growth of smartphones and tablets continues around the world, the potential for combining the best of flash and DRAM into a single technology is enormous. If NAND flash and DRAM are to be replaced over the next few years, ReRAM is best positioned as the successor. However, it is probably too soon to determine who has the lead in ReRAM technology, intellectual property or commercialization potential. It is not too soon, however, to note that the leaders in both NAND flash and DRAM are actively pursuing the commercialization of ReRAM.

Related Organizations
Stark Daniel G DEPRAG Schulz GmbH u. Co. WEST COMPANY, INCORPORATED, THE, A CORP OF COMMONWEALTH OF PA Vermont Natural Ag Products, Inc. WavMax, LLC
Tags
Patent Toshiba DRAM flash memory NAND-based flash memory
Share
Previous Post
Next Post
Anonymous i should say thats a great invention especially the 10ns speed and ability to work on low power better stil store data when power is out thats awesome especially for users in countries like uganda where power is not stable, My concern though is with all these firms joinin the battle for patents is going to ruin ReRam's usage as new storages will come up to compete with it. I dont see Toshiba or HP or even Dell sitting and not inventing a simillar storage in case they lose the patents.
May 14, 2012
Daniel PorterIt seems pretty clear ReRAM is going to be the next "big" technology in the world of small technology. Like NAND, though, it's likely going to take a few years of development before they have it in a marketable form, and I think the company's that started earlier like Toshiba (and maybe Micron, now that they have Elpida's IP and expertise) are going to have a pretty significant advantage.
May 14, 2012
2nd Annual Patexia Mixer