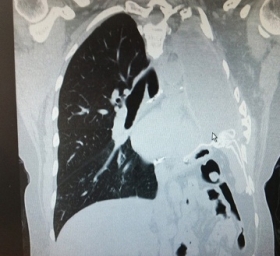 Although genetic and environmental risk factors have been linked to a small percentage of lung cancers, the vast majority are directly caused by cigarette smoking. These include some of the most aggressive, deadly forms of the disease, which are often detected in later stages when they are not as treatable.  Even when detected at Stage One, lung cancers still have only a 50% survival rate, which drops precipitously the later the stage of discovery. Doctors continue to be frustrated at not being able to find the cancers early enough, with traditional tools such as CT and chest X-Rays not helpful as prevention tools. These low survival rates are also due to the fact that lung cancer is notoriously difficult to treat for a multitude of reasons:  late presentation; invasive and metastatic in nature; and the lack of availability of a specific and reliable treatment to treat the latter stages of the disease. 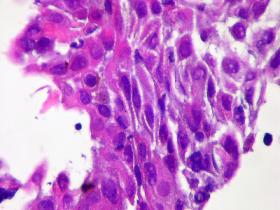 A new comprehensive genetic study, published this week in the journal Nature, now gives real hope to those afflicted with squamous cell carcinoma, which itself is responsible for 400,000 deaths per year.  Their genetic analysis, enlisting the efforts of a consortium of leading genetic sequencing centers showed that 75% of the cancers have mutations that can be targeted with drugs either currently available commercially or through clinical trials.  The study compared normal and cancerous tissue from 178 current lung cancer patients and found mutations across 18 different genes, with virtually all of the tumors possessing a mutation of the TP53 tumor suppressor responsible for DNA repair.

“We clearly see mutations in lung cancer that we see in other human cancers,” says Richard K. Wilson, PhD, director of The Genome Institute at Washington University. “This reinforces something that we’ve been seeing in a lot of our cancer genomics work. It’s really less about what type of tissue the tumor arises in – lung, breast, skin, prostate – and more about what genes and pathways are affected.”

For one thing, despite over 40 years of a commitment to the War on Cancer, it’s a war we are largely losing, with most advances in life saving therapy due to lifestyle changes and not drugs developed through traditional drug-development pathways.  Yet in other ways, cancer research is in a current golden age, with genetic discoveries and an understanding of the disease that will revolutionize treatments.  Many researchers think we should rethink treatment altogether, with tailored, targeted therapies that target specific molecular sub-genetics within a cancer, rather than a blanket cancer, such as lung cancer, altogether.  The discovery of molecular targets for lung cancers gives patients immediate hope for therapies that already work, without having to endure years of clinical trials for a drug that may not even target their cancer’s genetic profile.

On a larger scale, we may be learning much more from this study about what cancer ‘is.’  The researchers in the study above noticed mutations in lung squamous cell carcinomas that are shared with head and neck squamous cell carcinomas, leading further credence that we will soon reclassify cancer not by the organ it afflicts but by overall genetic profile.  Even the term cancer may eventually be too inclusive of a term for what is growingly evolving as a cluster of individual diseases, each with highly differing therapeutic strategies.