It’s a new year, and time to take a look back at the most innovative countries and companies in 2014. The World Intellectual Property Office (WIPO) has released its report on 2014 PCT filing data, and there are some interesting trends and reversals worth a closer look.

Starting with the most innovative countries, the US, Japan and China were the top three in terms of WIPO patent applications filed. The US had 61,492 total applications, followed by Japan with 42,459, and China in third with 25,539.

Looking beyond the raw numbers at growth, China and the US together represented 87% of total growth in filings. WIPO itself saw a 4.5% increase over 2013 filings. Chinese filings grew by 18.7%, and those from the US by  7.1%.  Japan, despite retaining its second place seat, actually saw a decline of around 3% compared to the previous year’s filings.  Europe displayed some positive momentum with the UK, France, and Germany all showing growth. 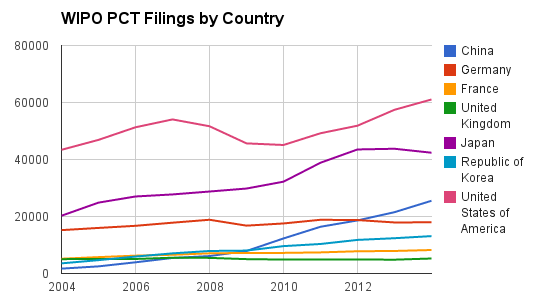 The growth in Chinese applications is impressive, but should also be taken with a grain of salt. The Chinese government has set high targets for patent filing numbers, and they are offering incentives to Chinese companies to file. It will be interesting to see in the long term the number of recent filings resulting from the incentive program that hold up.

Turning to the top individual companies, the telecom industry clearly won the day. The top three filers were China’s Huawei Technologies Co. followed by US-based Qualcomm, and then ZTE, another Chinese company. Last year’s leader, Panasonic, was pushed down to fourth place. Not only was Huawei the top filer, but it also had the largest growth in PCT filings, with 1,332 more filings than the previous year. China’s Tencent and US-based Microsoft also saw major increases with 727 and 652 more applications than in 2013 respectively. Overall there were six US companies listed in the top 25 applicants: Google, Intel, Qualcomm, Microsoft, HP, and United Technologies. 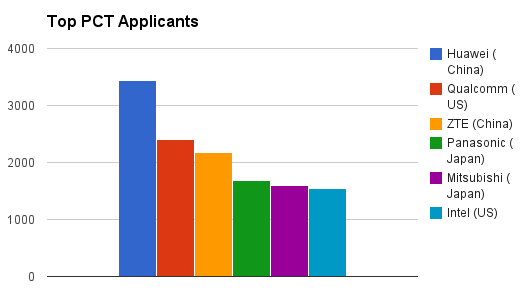