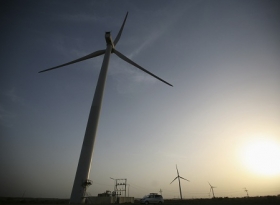 Nearly everyone is looking for an alternative to dino juice. Still, nothing has broken through yet as a mainstream alternative. Detroit's electric cars have made inroads, but America isn't exactly over the moon about them. In fact, electric cars sales took a dive in April. However, promising developments like Elon Musk's Tesla Motors slow creep toward a stylish, powerful and affordable purely electric car have caught the imagination of the innovation community. But few consider even more exotic power sources, such as the lithium-air (Li-air) battery.

Li-air batteries are in their infancy and still have a number of significant operational problems prohibiting widely commercial use at the moment. However, the basic idea is this: The anode oxidizes lithium, creating electrons and lithium ions. This creates electricity while the ions travel across the electrolyte. The battery produces little more than oxygen waste. However, Li-air batteries are highly sensitive to environmental moisture, making them currently unfeasible. Further, it's not only difficult to recharge an Li-air battery, it's hard to even measure if the battery is being recharged at all.

The potential of a working, commercially viable Li-air battery is the promise of 500-mile car trips 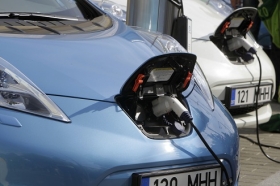 without a single recharge. Thus, it's been a sort of holy grail in the energy community. Energ2 of Seattle believes that it's on the verge of a breakthrough in the "next few years" that will revolutionize personal transportation. There's one small problem with this assessment: It carries all the irrational exuberance of a start-up. IBM, also hard at work on finding the Holy Grail of Li-air batteries takes a more measured approach. They believe that in the next few years there will be a meaningful breakthrough in the form of a lab demo or similar in the next three years. Either that, or IBM is giving up.

IBM clearly has a hand in Li-air development. Big Blue won't reveal much about its grants, but the New York Times did report that IBM is spending millions on this.

The commercial potential can't be overstated. This could potentially be the biggest development since the internal combustion machine, with the ability to radically transform American society in a short period of time. Or it could be a blind alley, a black hole of money that forms a mini bubble in the economy. Only time and the right breakthroughs will clue us in. No one, not even the (intellectually honest) experts can predict whether Li-air will pan out or be a huge bust. A senior researcher working with IBM did say that he has been more optimistic due to recent developments in the solving the recharge problem.

The ability to remake the American social landscape isn't limited to cheap gas or even green jobs. Indeed, one might rightly wonder how existing energy companies will take to having a massive source of revenue. The next great leap forward in energy coming from the tech industry will radically alter the balance of power in the economy, providing Big Data with social weight and leverage they simply do not currently possess. Further, the consequences for the American political scene can't be understated. In the 2012 election, Big Data employees make up a core donor constituency for the Democratic Party. Thus, the spoils of a war between the innovation-tech sector and the manufacturing-energy sector -- notoriously reticent to get on board with the post-fossil future -- are high indeed.

None of these changes are limited to the Li-air battery. Whoever is able to outfox energy companies stands to spark off a new era of American business the likes of which we've not seen since the days of William Randolph Hearst.