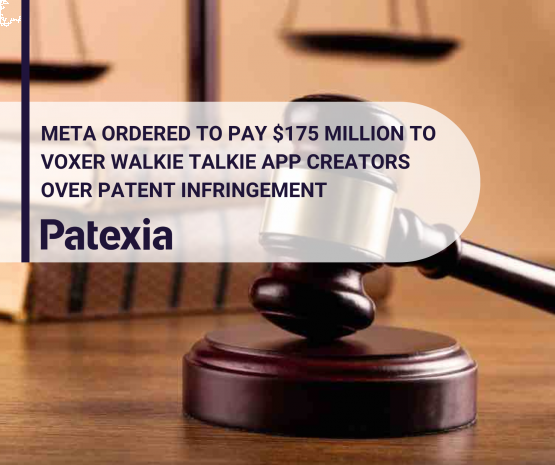 Amidst news related to trademark infringement lawsuits against Meta, with several companies claiming that the new Facebook company name infringes theirs, a Texas jury has ordered Meta to pay $174.5 million as damages for patent infringement.

It began on Jan., 7, 2020, when Voxer filed a lawsuit accusing Meta of infringing patents 8180030; 9634969; 10109028; 10142270; and 10511557. According to the complaint, Voxer’s co-founder Tom Katis was serving as a Special Forces Communications Sergeant in a combat deployment to Afghanistan when he first thought of the technology in question during a battlefield issue in 2003. By 2006 he and his team began to develop communication solutions and ultimately launched the Voxer app in 2011. Soon after this launch, Facebook initially approached Voxer for a collaboration, resulting in Voxer disclosing its patent portfolio and technology to Facebook. The talks, however, did not finalize an agreement, and Voxer was then identified as a competitor by Facebook, despite not launching Facebook Live or Instagram Live until 2015 and 2016, respectively.Both of these features are the ones that Voxer alleged as infringing the patents in question.

As a defense strategy, Facebook filed IPR2021-00112, IPR2021-00113, IPR2021-00114, IPR2021-00115, and IPR2021-00399; however, all of these petitions resulted in denials from the PTAB. During the trial, they also argued that their services didn't work the same way as  Voxer’s patented technologies. However, this didn't convince the jurors who granted Voxer $174.5 million in patent royalty damages after a seven-day trial. After this decision, Meta’s several spokespeople have reconfirmed their belief that the evidence they provided revealed no sign of infringement and the case would continue in appeal.