Last month we published our 2nd Patent Litigation Intelligence Report. We evaluated more than 14000 patent litigators who were active during a 4-year period from July 1, 2017, through June 30, 2021. In previous weeks, we provided some statistics and also covered the most active and best performing law firms and companies in patent litigation (Patexia Insight 126, Patexia Insight 127 and Patexia Insight 128). Today’s insight will focus on some of the top attorneys as evaluated in our latest report based on their activity and performance.

During this 4-year period, a total of 14,506 patent cases were filed in different district courts all around the country with the majority of the cases in Delaware, Texas and California. 3050 law firms represented 14,251 plaintiffs and defendants. Including local counsels, we counted a total of 14,685 patent litigators who were working on these cases.

Out of these 14,506 patent cases, 12116 had concluded with a decision status listed in PACER at the time of the publication of our report. This is essential to us especially when developing the performance ranking, which highly depends on the outcome of the case and the success scores we calculate for each of the parties involved. The following chart summarizes the outcome of these 12116 cases. 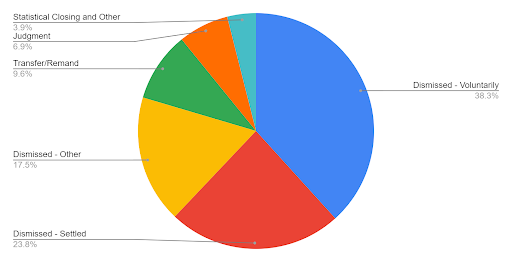 As shown above, 79.6% were dismissed for different reasons, while a relatively small percentage (i.e. 6.9%) went to a judgment of some sort. The remaining were different closures or transfers.

The status provided by PACER is often insufficient in knowing the exact outcome and who came out better, especially for the “judgment” type. To develop success scores we needed to answer the question: Which party came out ahead in the litigation? As a result, we had to manually review many documents for all “judgment” categories, so that we could determine the case outcome.

As explained further below, we classified various outcomes and allocated points to each of the parties or their representatives involved in the case. We even considered the outcome of the related IPR petition whenever available. In total, for each of the activity and performance, we looked at three categories: Defendant, Plaintiff and Overall.

The final Performance Score was calculated as a weighted function of both activity and success. Being ranked in the top 250 attorneys out of 14,685 means that the attorney is in the top two percentile.  Here we cover some of the best performing and most active attorneys in no particular order:

The complete version of the Patent Litigation Report further covers activity and performance and provides the rankings for the top 1000 most active attorneys. The report also includes the top 3 clients for each of them.

As shown below, we allocated points to each of the parties or their representatives based on the overall outcome of the case. We even considered the impact of the IPR in a settlement situation. For example if a case is settled after IPR is denied it may indicate that the settlement was more in favor of the patent owner (plaintiff).

We also separated the non-scorable cases where there was no clear winner or loser in the case. This was different from the settlement status as often the confidential terms are unknown to the public.

To develop our performance scores we used a weighted average of BOTH the Activity Score AND Success Score i.e. “win” percentage.

When it comes to ranking entities by activity, we noticed how a single plaintiff with a handful of patents goes after hundreds of companies. More defendants usually means more work for the plaintiff, however the amount of work does not go up linearly with the number of cases filed (if the same patents are considered). The number of patents involved in a case directly impacts the amount of work that each party or their representatives need to handle. As a result, the activity score was calculated by taking into account the number of cases as well as the patents involved. Furthermore, we gave slightly higher points to more recent cases.

In the following weeks, we will continue our coverage of top ITC attorneys and law firms. Our 3rd Edition of ITC Intelligence report was published last week. We have also started preparing our 4th Annual Patent Prosecution Report. This year for the first time, we will cover attorney/agent level rankings as we have extracted the information from Public PAIR data. Stay tuned!