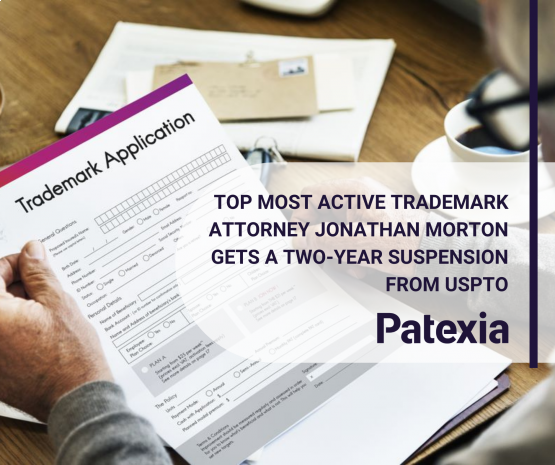 Last week, Patexia released its second annual Trademark Prosecution Intelligence Report. Besides evaluating the rankings of all stakeholders by activity and performance, the report also included several analyses of trademark filings, registration trends, domestic and foreign activity, etc. One of the key highlights in this report was the unusual foreign activity in trademark filings, specifically the one originating from China.

During the past decade, the Chinese entities have increased their activity before the USPTO. This was even noticed in patenting trends, since China now ranks the second most active patentee, as covered in Patexia 136. The patent and trademark filing growth before 2019 can be justified by the amount of innovation, market expansion, new products, and ecommerce businesses. However, during 2020 the trademarks increased by 143% and the same trend repeated in the following year. In 2021, a total of 180,029 trademarks were filed on behalf of Chinese entities, which is 26.5% of the total 678,923 trademarks filed at the USPTO. This is a significant climb compared to ten years ago, where Chinese originated trademarks only accounted for less than one percent.

As covered in the Patexia 137, this growth could be attributed to “non market factors” such as government subsidies, fraudulent filings, as well as applicants acting in bad faith. The abnormal trademark filings have concerned the USPTO and resulted in the office taking some measures to keep up with the new imposed rhythm of filings. The USPTO also did several analyses to understand the reasons behind this growth. In some cases, the USPTO even took measures and sanctions against several entities with huge numbers of fraudulent filings, such as the ones against Yusha Zhang and Shenzhen Huanyee Intellectual Property Co., Ltd in December 2021.

About a month ago, the USPTO announced the suspension from the practice of the U.S. attorney Jonathan G. Morton, one of the most active attorneys, filing over 32,000 trademarks during the past five years. A quick search in Patexia's Trademark Analyzer tool reveals the activity coming from Morton to the USPTO from 2017 to 2021: 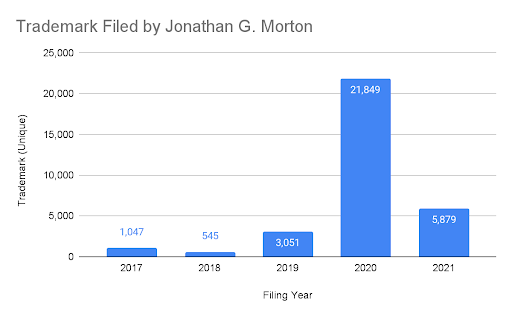 As you can see from the above chart, the activity has been comparatively modest before 2019, skyrocketing during 2020 with 21,849 trademark filings. A growth in filings has been observed in many US based attorneys after 2019, however not in this magnitude. The USPTO actually made some changes to the trademark prosecution procedure in mid 2019, requiring all applicants which were not domiciled in the United States to engage US licensed attorneys to file and prosecute trademark applications. This was their attempt to solve the issues with the trademark filings from foreign entities which have recently been on the rise. Many of these applications had inaccuracies and were potentially fraudulent, such as the ones which claimed to represent a trademark already used in commerce, but had digitally altered images in violation of USPTO rules. Exactly in August 2019, when the changes came into effect, Morton reports being approached by several foreing entities, mostly coming from China, interested in his trademark services.

The non-practitioner entities wanted only a U.S. counsel for their foreign-domiciled trademark customers as the trademark applications were already stipulated by them. This resulted in Morton not setting a limit to his volume of work which would’ve allowed  him to provide a quality representation for the customers. In his words, the typical practice was to receive previously prepared trademark applications from trademark services companies located in China. These were then reviewed by him or his non-practitioner assistant, and then personally signed only by him to be later filed to the USPTO. This practice of work soon resulted in some unusual numbers of applications, namely over 32,000 filed since 2019. It was reported that on more than one occasion, more than 400 trademark applications were filed in a single day. Morton acknowledges that many of these were “rushed and sloppy” applications, sometimes spending from 2.5 to 10 minutes to review the applications and determine the legitimacy of information.

The high number of filings made the USPTO conduct an investigation that concluded with numerous findings. Besides the lack of enough time to review the applications, as well as the unusual filings in short periods, it was also discovered that Morton failed to provide adequate representation due to the absence of a system that would check for conflicts of interest between the clients, which are unavoidable in large numbers. Furthermore, trademark applications require a specimen included, which shows the trademark exactly as used in commerce, and the US practitioner who files the application is required to validate it, in addition to the rest of information provided by the applicant. This was not always performed adequately by either Morton or his non-practitioner assistant. Lastly, having a non-practitioner prepare and file trademark documents with the USPTO without vetting these documents first, was considered another violation by the investigation. For all of these findings, Morton is suspended from practice before the USPTO in patent, trademark, and non-patent law for twenty-four months. He will be eligible for reinstatement by filing a petition only after 18 months after the date of the USPTO order of suspension. A six hour training on ethics and professional responsibility is one of the conditions of reinstatement. It is believed that the USPTO somehow has considered his cooperation in this matter as well as the limits set by him for the future trademark work, which are shown in his activity for 2021. It is not clear how severe the penalization would be without having these taken into account. This move will probably impact the work being done by other attorneys that work broadly with foreign applicants. Furthermore, around 3,000 pending applications filed by Morton need to be represented by another attorney.