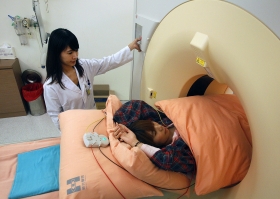 New research out of Stony Brook University holds significant potential to revolutionize magnetic resonance imaging (MRI) technology, especially for medical applications. In a paper published in PloS One, Assistant Professor Balaji Sitharaman and his team describe the development of a new, highly efficacious nanoparticle-based contrast agent that will improve disease diagnosis and detection in both a more cost effective and safe manner.

MRI technology, invented by Stony Brook University Professor Paul Lauterbur, is a powerful diagnostic tool that uses a magnetic field and radio wave pulses to provide detailed information about different structures within the body, including vasculature, bones, and internal organs. MRI contrast agents are used to improve visibility of internal body structures by altering relaxation times of atoms in the body tissues where they are distributed. The most common contrast agent currently used in medicine uses the rare earth element gadolinium. Unfortunately, recent studies have revealed deleterious side effects, such as nephrogenic systemic fibrosis. The FDA has placed recent restrictions on what patients can receive gadolinium contrast agents, as well as warnings that must be placed on labels.  Additional limitations of most current MRI contrast agents include a lack of suitability for molecular, extended blood pool and tissue-specific imaging.

Instead of using gadolinium, Dr. Sitharaman’s team eliminated toxicity by using a graphene-based 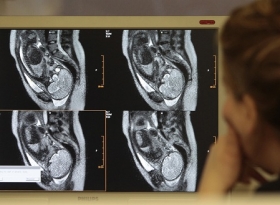 agent. Graphene is an allotrope of carbon, with one-atom-thick planar sheets of carbon atoms that are densely packed in a honeycomb crystal lattice. Its strength, flexibility and electrical conductivity are considered so bright for engineering and high-tech applications, that the two University of Manchester scientists that researched it were awarded the 2010 Nobel Prize in physics. Indeed, recent work by University of Maryland scientists has created a more sensitive photodetector by tricking graphene layers heated with a beam of light. Use of this technology spans security imaging, chemical analysis in the laboratory and even studying the structure of the Universe.  Advances such as these have led many scientists to wonder if graphene is not a ‘miracle material’?

For his part, Dr. Sitharaman believes that the technology he and his team have developed will “lower health care costs by reducing the cost per dose as well as the number of doses required. Further, since this new MRI contrast agent will substantially improve disease detection by increasing sensitivity and diagnostic confidence, it will enable earlier treatment for many diseases, which is less expensive, and of course more effective for diseases such as cancer."

Dr. Sitharaman hopes to develop graphene-based contrast agents for medical purposes, and has started a company, Theragnostic Technologies, Inc., to help spearhead research and development efforts. Realistically speaking, most clinical applications of graphene are still more theoretical than practical.  For one thing, graphene toxicity for this relatively new nanomaterial has yet to be deduced for short- and long-term exposure, with some researchers establishing enzyme activation and others direct cytotoxicity in in vitro studies. Nevertheless, pioneering early biomedical research studies still show tremendous promise for graphene for everything from carbon nanotube drug delivery in cancer to gene therapy grafting to biosensing and bioimaging (such as the aforementioned breakthrough described above).

If researchers can establish safety guidelines for graphene for human use, it won’t be long before this nanowonder ushers in a new era of molecular medical marvel.