Search
James Lee PhillipsSep 29, 2012Science and Technology
Not So Remote: the current state of telepresence tech

Telepresence comes in two forms, each with its own endemic challenge. The basic real-world version is little more than enhanced videoconferencing, the sort of telecommuting that depends upon real-time connectivity and maximizing the "illusion of presence."

HP was at the forefront of telepresence innovation with Halo, developed with DreamWorks Animation (no Covenant involved). The "Collaboration Studio" approach was utilized by DreamWorks as well as PepsiCo and Advanced Micro Devices, until HP sold off the Halo assets to Polycom (establishing "a strategic partnership" of indeterminate boundaries).

Polycom continues to focus on building telepresence rooms -- ideally, one for each of the participants' locations. The elements include life-sized video and HD audio, with tracking cameras to follow the action, and special care to provide a natural feeling of eye contact and body language between the attendees. Toss in multiuser smartboards and other collaborative apps, and you start to pass "as good as being there" and enter into "cybernetic enhancements". Resistance, of course, is futile.

The same basic "enhanced videoconferencing" remains the standard current definition of telepresence. AT&T and Cisco, despite the demanding quality of each company's telepresence products and services, are not exactly pushing the boundaries of innovation in this field.

It's the extreme version, involving actual physical manipulation via remote-controlled avatars, that hearkens to science fiction as much as cutting-edge tech -- and yet, it's still much closer to a practical real-world application than most of us realize. 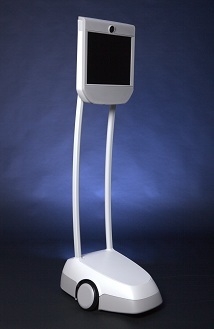 Take Suitable Technologies, for example. The company has developed Beam, a "client" (don't call it a robot, that'll just confuse the AI issue) that walks at your speed and talks with your voice. It's an eye-catching fella, made up of a pair of wheels and a monitor featuring your (more or less) life-sized face, along with an array of cameras, microphones, and speakers. Far more than an 'iPad on sticks', the Beam will set you back $16,000, which is a small price to pay to own your very own Whisperer in Darkness.

Or then there's Botiful, the Kickstarter project that jettisons the "life size" approach completely in favor of the unique advantages of smartphone connectivity. The stated possibilities also include using Botiful as a baby monitor that you can use not just to monitor but to also play with your baby, as well as checking under cars or other hard-to-reach places. The professional telepresence applications aren't ignored, either -- although not all companies would welcome a conference consisting of tabletop robots constantly turning to watch whoever's talking. Still, there's nothing like zipping around on a mouse droid... until some nasty Wookie scares you away, of course...

It's simply a matter of a little refinement, and a little extrapolation, to get to the telepresence future envisioned in science fiction. It's not easy to establish reliable connectivity for real-time HD audio and video, but that's been possible (if not 100% dependable) for a decade now. 3D video has penetrated even the consumer market in the U.S., and it would be easier to count the number of Japanese executives who DON'T communicate via a 3D monitor. So how long before we can expect life-sized three-dimensional avatars of your absent co-workers? In ideal conditions, it may be a matter of months... for a dependable enterprise deployment, maybe within this decade.

Physical manipulation is another issue. There are a multitude of sheer technical details in implementing real-time remote control of any sort of humanoid construct... even one with wheels, one arm, and a monitor for a face. Just think of the lag time that you get from trying to control a remote camera over the Internet -- even a mute, low-res camera will not exactly give you satisfactory pans and zooms unless you give it an extra few seconds to catch up to your commands. Multiply those technical needs by about two dozen..