Last week, we reported on the top five market leaders who represented petitioners and patent owners in Inter-Partes Review (IPR) from 2012 through the end of 2016. While volume offers key measure for activity, another important metric is the quality or outcome of the cases. This week, we turned our attention towards outcomes, reviewing the performance of law firms by measuring their success on the petitioner side or patent owner side. We learned the top five firms represented their clients in total of 236 cases out of 5,592 (approximately 4 percent). Duane Morris ranked first with a 90 percent success rate, followed by Fitch Even, White & Case, Klarquist Sparkman, and Sheppard Mullin.

Before delving into the details, let us explain how we calculated the IPR success rate for the law firms.

First of all, out of 975 firms that represented petitioners or patent owners on at least one of the 5,592 cases, we had to remove the firms with only limited experience. The reason is showing good results in a single case does not indicate consistency over many cases. There were many firms that were only involved in a single or couple of IPRs. We tested multiple ways of identifying them, such as looking at the firms with a below average number of cases (the average was 6 cases per firm) or above the median (which was 1 case per firm). However, because the distribution was not normal, this method didn’t work. We set the cut-off point as firms that had been named in at least 25 cases on either the petitioner side or patent owner side. Using this method reduced the total number of firms under consideration to 88. The smallest of the 88 had involvement in 27 cases and the largest one in 473 cases.

Next, we had to define the desired outcome from the perspective of the patent owner or petitioner. To do so, we assumed the patent owner would be satisfied if the Patent Trial and Appeal Board (PTAB) denied the petition. Although we know in some cases, after the Final Written Decision, some claims survive, our claim-level analysis of all IPR cases shows that from 2012 through 2016, a total of 27,571 claims were part of the cases that were instituted or reached the Final Written Decision phase.

However, out of this number only 1,966 claims were not instituted. Beyond this, even if some of the claims listed on the petition survive the invalidation, the patent has been damaged. This limits the ability of the patent owner to further license or negotiate based on that patent. Therefore, we assumed that the petitioner will be satisfied if the petition is instituted or reaches the Final Written Decision. We also assumed that Terminated with Adverse Judgment or settlement are other desired outcomes for the petitioner.

In addition, we removed all cases still pending. This included cases with the status: Submitted, Waiver Filed, PO Response Filed, Filing Date Accorded. This was necessary, because the outcome of these cases remains unknown and may end up on either side. The following table summarizes the outcome we considered for each case based on the current status (as of June 1, 2017):

We then calculated the performance of 88 firms in our study and developed the following top 5: Duane Morris ranked first with 52 cases and a 90 percent success rate. Fitch Even Tabin, a fairly small law firm headquartered in Chicago that represented patent owners in 37 cases, ranked second with an 86 percent success rate. White & Case (47 cases and 83 percent), Klarquist Sparkman (46 cases and 80 percent), and Sheppard Mullin (37 cases and 78 percent) were third, fourth, and fifth, respectively.

Starting with the petitioners, we followed the same guideline and identified the firms’ success rates by assuming that those cases Instituted, reached the Final Written Decision, Settled, or Terminated with Adverse Judgment represent desired outcomes from the perspective of the petitioner. 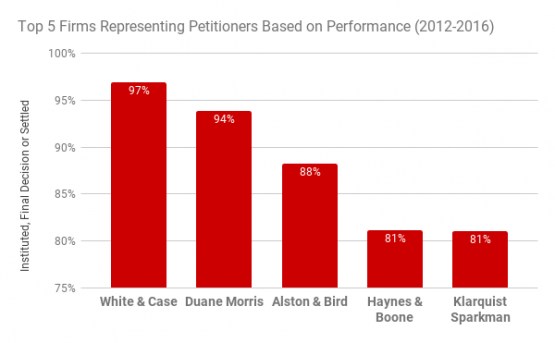 Haynes & Boone’s performance grabbed our attention. Although the firm ranked fourth on the petitioner side, it is worth mentioning it represented its clients in more than twice as many cases (122) as any of the other four firms. This shows Haynes & Boone’s consistency in its performance.

We next investigated firms representing patent owners. Out of 713 firms, we identified the top 5 performing firms based on cases from 2012 through 2016. 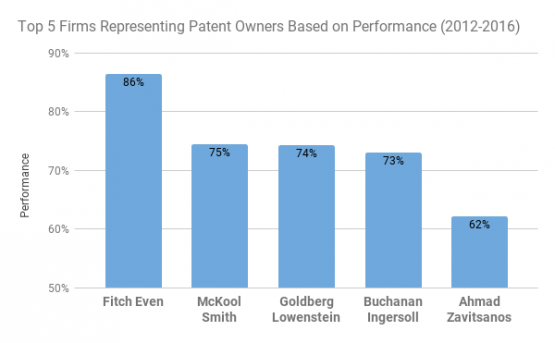 Fitch Even was ranked first with 37 patent owner cases, of which 32 were denied. Second through fifth were McKool Smith (52 cases and 75 percent), Lowenstein & Weatherwax (35 cases and 74 percent), Buchanan Ingersoll (26 cases and 73 percent), and Ahmad Zavitsanos (53 cases and 62 percent).

In general the success rates on the patent owner side is much lower compared to the petitioner side.

In the following weeks, we will investigate the firms’ performances at the claim-level. We will also identify the best performing firms in 2016, both in terms of volume/activity as well as outcome. We also plan to identify the most active attorneys representing petitioners and patent owners.

Note: If you are interested in an analysis and comparison of your IPR cases, contact us. We provide IPR Intelligence Reports, customized for your organization. Companies use our reports to evaluate law firms, while law firms use our reports to understand the IPR landscape, their position and performance relative to the market, and how to grow in this competitive market.