Over the last couple of weeks, we have reported the top five firms in Inter-Partes Review (IPR) from the perspectives of volume and performance during the period from 2012 to 2016. This week, we are moving one step further into law firms to identify the top five attorneys handling the largest number of IPR cases overall, as well cases on either the petitioner or patent owner sides. After reviewing 5,592 cases filed from 2012 through 2016, we learned that Scott McKeown from Oblon Spivak is the most active attorney for IPR. He has been named on 143 cases, including 37 cases representing patent owners and 106 cases representing petitioners. During the same period, Oblon Spivak had been named on 244 cases, which means Mr. McKeown has been involved in 60 percent of all cases Oblon has represented through the end of 2016. 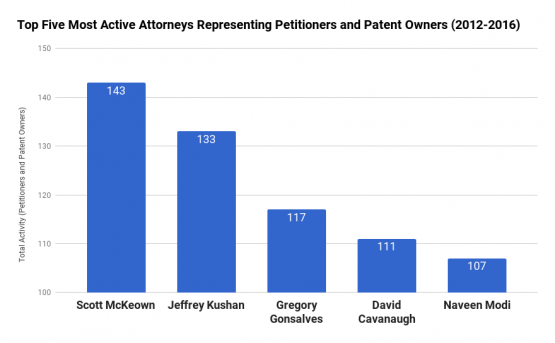 Jeffrey Kushan from Sidley Austin ranked second with a total of 133 cases, which included 12 cases on the patent owner side and 121 cases on the petitioner side. In Patexia Insight 27, we reported that Mr. Kushan had represented Apple in at least 81 IPR cases filed by the company. This means about 60 percent of his IPR workload came from a single client.

Gregory Gonsalves ranked third with 117 cases. The bulk of Mr. Gonsalves’ work is on the patent owner side. In fact, in 110 cases out of 117, he represented patent owners. David Cavanaugh from WilmerHale (111 cases) and Naveen Modi (see the update at the end of the article) from Paul Hastings (107 cases) ranked fourth and fifth, respectively. The following table summarizes the rankings:

We further investigated the activity of attorneys representing clients on the patent owners and petitioners sides. On the petitioners side, as we expected, each of the top five attorneys came from big law firms. Jeffrey Kushan from Sidley Austin ranked first with 121 cases, followed by Scott McKeown from Oblon Spivak with 106 cases. David Cavanaugh (102 cases) from WilmerHale, David McCombs (71 cases) from Haynes & Boone, and Joseph Micallef (62 cases), again from Sidley Austin, ranked third, fourth and fifth, respectively. 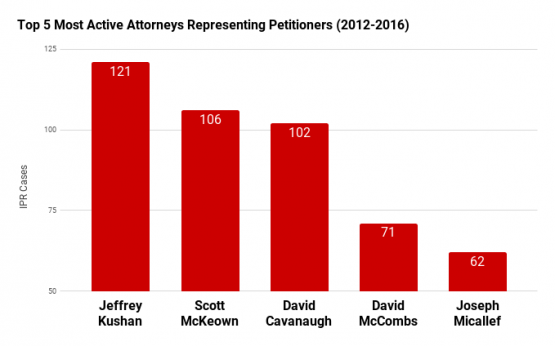 The following table summarizes the top five attorneys on the petitioner side with their associated law firms:

On the patent owner side, as expected, we observed a different trend. All attorneys except one (Robert Sterne) were from relatively small firms. This is in line with our observations as reported in Patexia Insight 35 and Patexia Insight 36[1]  (i.e., that smaller firms or solo practitioners generally represent patent owners). 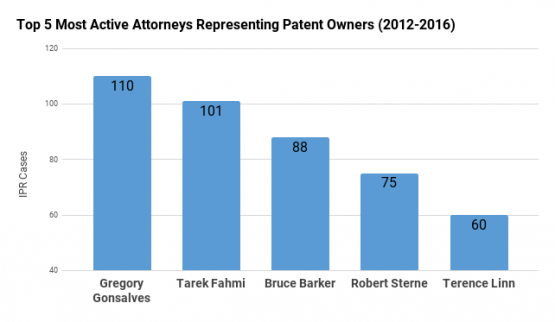 The following table summarizes the top five attorneys on the patent owner side with their associated law firms:

In the following weeks, we will review attorneys from a performance perspective, identifying the top five attorneys representing patent owners and petitioners in IPR cases.

We would like to further thank our readers who have provided very positive feedback over the last few weeks. We have taken your feedback into consideration and are in the process of putting together a report ranking the top 50 firms, attorneys, and companies. To learn about your ranking or the ranking of the firm representing your company, please Contact Us for more info.

Update (06/21/2017):Our analysis has been based on IPR cases filed by attorneys at their current firm. Also it did not include the cases that are still pending or have no attorney assigned to them at the time of this reporting. Some of our readers have correctly pointed this out. We would like to correct our data that Mr. Naveen Modi who had moved from Finnegan to Paul Hastings has been involved in 200+ IPR cases during his time at both firms.

Update (01/31/2018): This article has been updated and republished with the more accurate data in Patexia Insight 48.