Inter-Partes Review (IPR) has become an integral part of patent defense strategy. However, our analysis of IPR institution rate shows that it has steadily been declining, going from 61 percent to 42 percent for the period between 2012 to 2015. This happened while the denial rate increased from 9 percent to 44 percent during the same period. 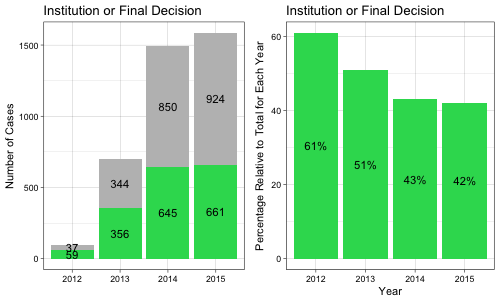 We compared case-level institution, settlement, and denial rates over the last five years to observe any pattern, as well as to see if the patent owners or petitioners have applied past learnings and changed their strategy over time. We limited this study to data through the end of 2015, as the data in the last 24 months is not final and will change over time.

We observed that institution rate declined from 61 percent in the first year of IPR (2012) to 42 percent in 2015. During the same period, the settlement rate remained relatively constant and in the high teens (except for the first year which was only 96 cases). 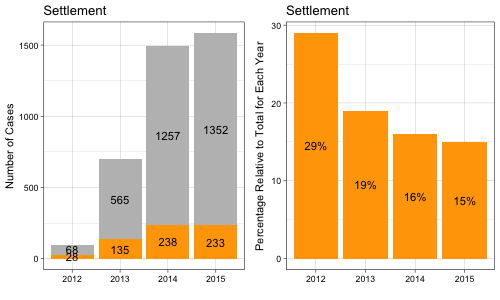 While settlement rate relatively stayed constant, during the same period, we observed an increase in the denial rate. In 2012, only 9 out of 96 cases were denied (9 percent). However, this gradually increased to 44 percent in 2015. 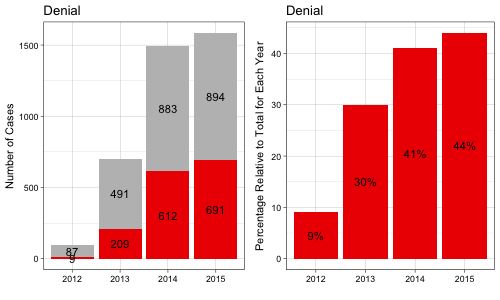 This decline in institution rate from 2012 to 2015 while may be attributed to many factors, could also signify that patent owners have become aware of the threat of IPR and choose patents they want to assert more cautiously. Therefore, we see that the denial rate has been going up while the institution rate has been declining. We have seen a shift in the timing of validity studies. In the past, validity studies were mainly performed by defendants in the patent lawsuits. However, recently we have seen a shift as a significant percentage of studies are performed by patent owners before enforcing their patents.

In late September, we released IPR Intelligence, our first report from IP Insights series, where we reviewed 6,580 IPR cases filed from 2012 through the end of the first half in 2017 and provided many different statistical charts about IPR at the case, patent and claim levels. We also calculated the performance and activities of more than 1,000 law firms and 5,000 attorneys in 6580 IPR cases. The report has received positive reviews and thanks to our partners, we are in the process of preparing a similar report for district court litigation in 2018.

In the coming weeks, we will release the names and performance of some of the best performing law firms that have been named among Patexia Top 50 law firms in different IPR categories. Stay tuned.