The number of bitcoin and blockchain patents and published patent applications has been rising exponentially in the past few years, with a motley group of companies leading the race. Recent public and private sector interest in cryptocurrency signals new institutions may be interested in filing in the coming decade and a new market is rapidly shaping with influx of capital. We looked at the top players, active in the cryptocurrency by analyzing patent applications filed with keywords “Bitcoin” or “Blockchain”. We learned that for bitcoin, close to 500 applications have been published in 2017, compared to only 6 applications in 2012. We also identified the top five companies for each category. 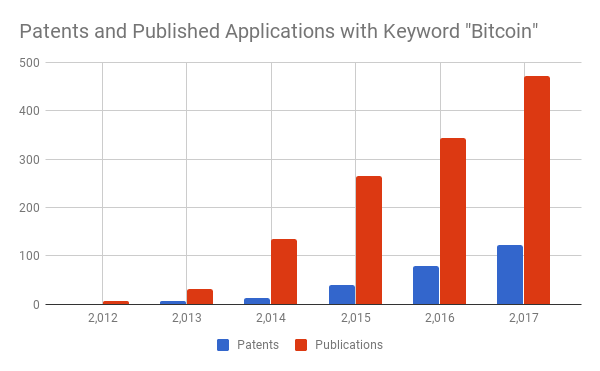 Bitcoin is a type of encrypted digital currency not backed by any government. Blockchain is the digital ledger (distributed database) in which bitcoin and other cryptocurrency transactions are publicly recorded. When examining the list of filers, it is important to review patent assignees worldwide.

As illustrated above, Patexia’s research showed six bitcoin patent applications in 2012, 134 in 2014 and 472 in 2017. The chart shows the number of patents (blue) or published patent applications (red) with the keyword “bitcoin” through December 12, 2017. Please note that the actual filing date of applications is exactly 18 months before issuance date of published applications and typically two to three years before issuance date for patents. Therefore, this data does not cover the activity of companies in the last 18 months.

The leader of the pack for bitcoin, with 73 patents or published applications , is Game Play Network (GPN), a Los Angeles-based company. GPN is a gaming company that does business as “b Spot” and bases payout for a mobile gaming community on live horse racing. The second two filers are well established companies in banking and technology sectors: Bank of America and IBM, both at 42 patents or patent applications. Bellevue, Wa.-based Elwha LLC, a subsidiary of  Intellectual Ventures (IV), the patent holding company begun by Nathan Mhyrvold, former CTO of Microsoft, is in fourth place with 39 patents or applications. Nathan and some of the other founders of IV are among the inventors of many of Elwha patents. UPS rounds out at the top five at 38. 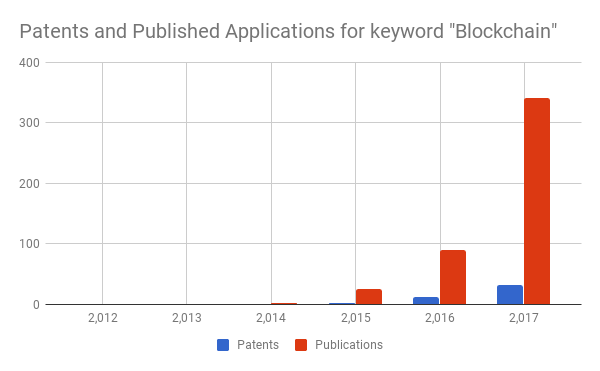 As for “Blockchain” we saw a similar exponential growth. While only two blockchain patents and 25 blockchain patent applications issued in 2015, the number grew to 32 patents and 341 applications in 2017. The chart above shows the number of USPTO patents (blue) or published patent applications (red) with the keyword “blockchain” through December 12, 2017. Again the actual filing date is 18 months before publication for applications and on average two to three years before issuance for patents. The landscape as well as key players might have changed substantially in the last 18 months.

The frontrunner for blockchain, with 30 patents or applications, is Bank of America. Mastercard International follows at a distant 16, with Fidelity Management and Research (FMR) at 14. IBM holds the fourth place spot at 12. 402 Technologies SA, a Luxembourg-based patent holding company, holds 11 patents.

Patexia explored companies interested in future of banking back in 2014 by reviewing relevant IPC codes (The future of retail banking). The past and present lists reveal that Bank of America was the first bank and most active company in filing applications related to both bitcoin and blockchain. Other fans of bitcoin included Visa, a traditional financial institution, tech giants, including IBM and Apple, fintech startups like Coinbase , and retailers like Walmart, and IP aggregators like Intellectual Ventures. Even exchanges like NASDAQ were among the top 10 filers. However, what came as surprise was very limited activity by tech giants such as Google and Microsoft as well as some giant banks and insurance companies such as Credit Suisse or ING. They were not even among the top 25 assignees.

For those new to the complex world of cryptocurrency, bitcoin is not the only form out there. Ethereum, Ripple, and Litecoin are other types of cryptocurrency which are becoming increasingly popular. Just as bitcoin, they wax and wane in stability. This fluctuation can make conditions ripe for financial abuse.

It is difficult to ascertain the current significant filers in the U.S., as USPTO publishes applications after 18 months. For that reason, the numbers stated here do not include applications filed after mid-July 2016. The study also does not look into second and third-degree subsidiaries. Larger companies may acquire small startups or have filings under different entity names for accounting or alternative purposes. We also did not include all other relevant keywords in the cryptocurrency world and the study was limited to only “Bitcoin” and “Blockchain”.

When reading about cryptocurrency, take all information with a grain of salt. The values of different forms of cryptocurrency have soared and plummeted in recent months. There is also a question as to whether world leaders may take measures to discourage the legality and popularity of cryptocurrency itself. But what everybody agrees on is the value of the underlying blockchain technology which is believed to eliminate lots of traditional business models that are currently relying on intermediary to create trust and/or facilitate transactions (e.g., banking, insurance, brokerage firms, notary publics, etc.). Most of these business models may be due for an upgrade and will heavily impacted in the next couple of decades.

Next week we plan to publish the top five law firms in 2017 in terms of their activity in Inter-Partes Review (IPR), representing petitioners, patent owners or both. Stay tuned.