Last week we released the names of most active law firms in Inter-Partes Review (IPR). This week, we focused on attorneys and have identified most active attorneys representing petitioners, patent owners and overall. In order to calculate this, we looked at all IPR cases filed from September 2012 through the end of second quarter in 2017. This covered total of 6,580 cases. Overall, Naveen Modi from Paul Hastings was ranked first with total of 240 cases followed by Karl Renner from Fish & Richardson with 217 cases. 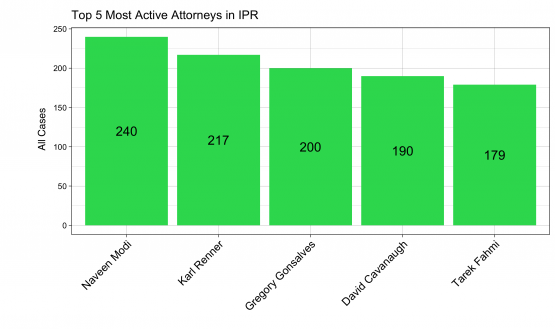 Gregory Gonsalves from Law Offices of Dr. Gregory J. Gonsalves with 200 cases, David Cavanaugh from WilmerHale with 190 cases and Tarek Fahmi from Ascenda Law Group with 179 cases were ranked third, fourth and fifth, respectively. The total number of attorneys who have been named in one of the IPR documents released by PTAB is over 5,000.

On the petitioner side, there were more than 3,100 attorneys represented petitioners in 6,580 cases. David Cavanaugh from WilmerHale with 160 cases was the most active attorney on the petitioner side followed by Jeffrey Kushan from Sidley Austin with 146 cases. Karl Renner of Fish & Richardson (144), David McCombs of Haynes and Boone (132) and Naveen Modi from Paul Hastings (132) took third, fourth and fifth positions, respectively. 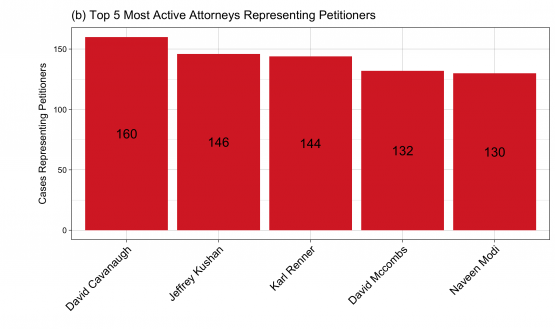 On the patent owner side, we looked at more than 3,200 attorneys who had represented patent owners in 6,580 cases. In general, attorneys on the patent owner side tend to come from smaller firms. We also noticed that activity for some attorneys are higher because they represented the same client (e.g., Non-Practicing Entity or a solo inventor) on several IPR cases filed by many operating companies. This happened as a result of multiple district court cases filed by the same company or inventor. For example, as we reported earlier in Patexia Insight 32, 125 IPR cases had been filed by multiple companies to challenge the same 10 patents from Zond. All these cases were represented by Gregory Gonsalves and his firm. He is the most active attorney representing patent owners with total of 192 cases followed by Tarek Fahmi with 176 cases from Ascenda Law Group.

Bruce Barker from Chao, Hadidi, Stark and Barker was ranked 3rd with 121 cases followed by Robert Sterne (120) from Sterne Kessler and Naveen Modi (110) from Paul Hastings.

As you see, the top three most active attorneys representing patent owners all come from small firms. Smaller firms are more popular on the patent owner side. This is partly because of the cost as patent owners are typically smaller entities or individuals that are more cost sensitive. Also in some cases, they may be handled on a contingency basis by the same attorneys representing the plaintiffs in the district court cases on contingency. Smaller firms are more open to take contingency cases. In the coming weeks we plan to highlight some of the top performing firms that have been handling these cases on contingency. 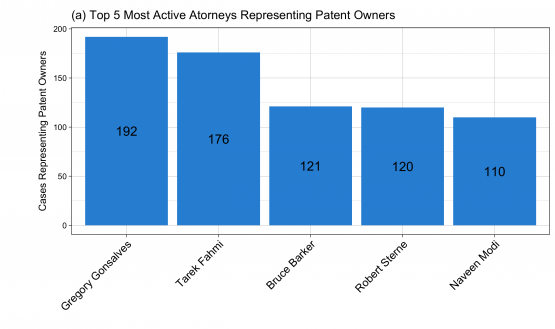 Performance of any organization is measured by quality and activity of individuals who form and run those organizations. Legal sector is no different. Law firms are constantly seeking to bring highly active and best performing attorneys. Since IPR and PTAB have become popular, top law firms which did not have an active PTAB practice have started forming and adding PTAB practice groups to their Intellectual Property or IP Litigation groups. This has created a lot of lateral opportunities for PTAB attorneys who are among the most active or best performing. We have seen a higher than usual demand in Patexia’s recruiting division as a number of our clients have asked us to help them find leaders for their PTAB practice groups.

For example, Naveen Modi was at Finnegan prior to joining Paul Hastings a few years ago. He is currently the Global Vice Chair of IP at Paul Hastings. Some of the law firms which were very active in the beginning of PTAB formation, have seen their top talents leave in recent years. For example, last week we reported Oblon among the top 5 most active firms in IPR. However, the firm has lost their top two most active attorneys in IPR last year. Scott McKeown who was ranked among the top 10 most active attorneys in our IPR Intelligence Report with more than 160 cases, went to Ropes & Grey last year and currently is the Chair of PTAB group at the firm. Greg Gardella who was also ranked in multiple categories in Patexia’s IPR Intelligence Report with over 80 cases, left Oblon last year to form his firm, Gardella Grace. These two were key attorneys, responsible for more than two third of all IPR cases represented by Oblon.

While activity is important and usually higher activity translates to larger book of business for the attorney and overall higher revenue for the firm, it does not necessarily mean better quality for the client. Performance and quality should be the main factor companies consider when they choose their law firms and counsels.

As part of our mission to bring transparency and efficiency to IP, we are trying to find better ways to measure performance of law firms and attorneys. In our IPR Intelligence Report released a few months ago, we published the top 50 best performing attorneys and law firms.  We believe quality of work should be emphasized more and considered among the top decision making criteria by in-house counsels.

For Further Reading
We have released our first comprehensive IPR Intelligence Report last Fall under our Patexia Insights arm, and it’s available for download. The report investigates IPR challenges from many angles, including the top 50 law firms representing petitioners and patent owners in terms of activity and performance. Also included is a ranking of petitioners, patent owners, and PTAB judges. The goal is to help both parties involved in IPR better understand this growing market and make informed choices about their service providers.

In the coming weeks, we plan to publish the list of best performing attorneys and law firms in IPR. We also plan to highlight some of the less known firms that have been outperforming large and well known firms in terms of quality. We plan to interview the key partners at these firms and highlight the reasons for their success. Stay tuned!

Update (01/31/2018): Our next update of the most active attorneys will be after the second quarter of 2018. As you may have noticed, we have updated attorney profile pages and some statistics related to their PTAB, District Court and Prosecution history will be available in the coming weeks.