Couple of weeks ago, we reported on the top five firms leading in Inter-Partes Review (IPR), for a period covering September 2012 (IPR inception) through the end of the second quarter in 2017. This week, we focus on a more important metric: performance. This metric is essential since it is used by companies to identify and evaluate their service providers (legal counsels). For the same period, we reviewed the performance of more than 1,000 law firms, representing their clients (i.e., patent owners and petitioners) in 6,580 IPR cases to find out which five firms had the best outcomes for IPR. This performance-oriented review covers the top five best-performing IPR law firms representing petitioners, patent owners and overall.

White & Case led the group at 91 percent, followed by Duane Morris (90 percent), Klarquist Sparkman (79 percent), Kramer Levin Naftalis & Frankel (77 percent), and Latham & Watkins (73 percent). The small numbers in the bars below indicate how many cases a firm won overall and how many it lost. Finding the ratio of wins to the total allowed us to calculate the percentage. 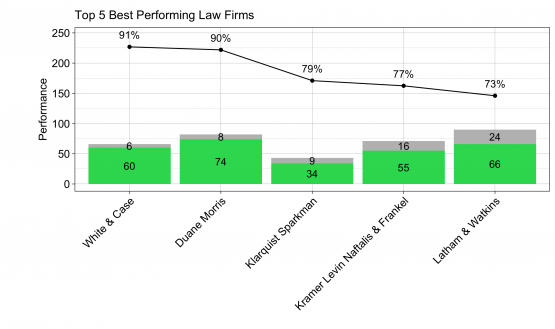 To measure the performance, we first defined the subset of qualified firms. This was done by limiting our analysis to only those firms that had been involved in a minimum number of IPR cases over the period of this study. For the patent owner or petitioner performance, the cut-off number was 20. Any firm with less than 20 cases on each side was not included in that performance analysis. For overall performance, we only considered those firms with overall activity of at least 40 cases over the period of study (September 2012 to June 2017). We also had to define the win / loss for each case in order to measure the performance of the firms involved. We limited this study to cases that had been denied, settled, instituted or received the final written decision as of September 2017. The following table summarizes who was considered the winner for each scenario.

As you can see in the above table, it is much more difficult to win as a patent owner. This was based on the feedback we received from some of the patent owners who believed that even when the IPR was settled, it usually meant the patent owner had no choice (assuming that the patent was already in a district court case) and did not see any value to continue the fight. Also at the claim-level, while it varies case by case, often times even survival of some claims still is a loss for the patent owner.

As to the five best-performing law firms representing petitioners, White & Case was number one at 96 percent, followed by Duane Morris at 90 percent. Nixon & Vanderhye (90 percent), Turner Boyd (86 percent), and Haynes & Boone (84 percent) rounded out the group. Nixon & Vanderhye took the lowest number of cases of the top five (18 wins, 2 loses, for 20 cases overall). Haynes & Boone took the most (118 wins, 23 loses, for 141 cases overall). This is impressive as it is much more difficult to maintain the same quality of work for a large number of cases. 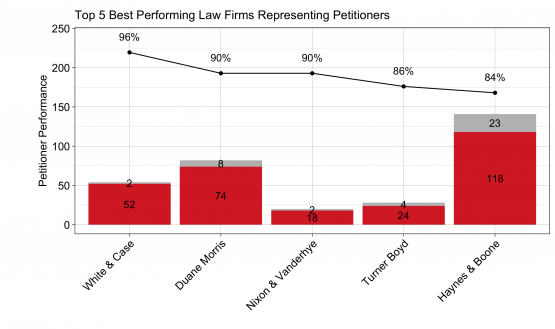 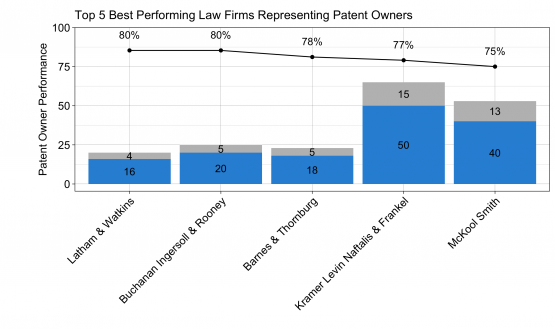 One general observation was that most of the firms on the patent owner side tend to be smaller relative to those on the petitioner side. We believe this is mainly due to size and financial power of the clients on each side: patent owners often tend to be individuals or small entities enforcing their patents while petitioners tend to be large corporations controlling larger market shares.

As mentioned earlier, performance is more important than activity and that should be the key metric companies consider when it comes to hiring counsel for their next IPR. Higher activity usually means larger team and larger firm but it does not necessarily mean higher quality.

To see if this is true about our IPR dataset, we decided to identify very small firms that had outperformed AM LAW 100. The most impressive ones were three firms, which caught our attention as all three had only about or less than 10 attorneys, smaller than any other firms that made it to our top 50 best performing list: Turner Boyd ranked 4th on the peitioner side, Lowenstein & Weatherwax ranked 6th on the patent owner side and Dovel & Luner ranked 10th on the patent owner side. For the period of our study, Lowenstein & Weatherwax had been involved in more than 60 IPR cases while Dovel & Luner and Turner Boyd were both involved in more than 30 IPR cases. However, Turner Boyd lost their top IPR attorney, Matthew Smith who left the firm last year to form his firm, Smith Baluch in July of 2017.

Demand for IPR Attorneys is still High
As we mentioned earlier, IPR has been growing steadily (Patexia Insight 45). A lot of firms including some of AM LAW 100 which had ignored PTAB in early days, perhaps because of its lower revenue size compared to district court litigation, are now looking for groups or individuals with IPR experience. However, some of those individuals with experience prefer to form their own firms (e.g., Gardella Grace or Smith Baluch). Patexia’s Recruiting Division is actively looking for IPR attorneys as we have a number of clients interested in starting or expanding their PTAB practice. Feel free to contact us if you have the experience and you are interested in learning more.

In the following weeks, we will identify the best performing IPR attorneys. We also plan to analyze the cases handled by some of the less known but best performing firms to better understand their team makeup, clients, opponents and recipe for their success. We also plan to reach out and interview them if possible. If you have any questions, comments, or suggestions, please don’t hesitate to get in touch.