Last week we released the list of best performing law firms in Inter-Partes Review (IPR), which created some excitement in IP community and we were asked by our readers about similar performance ranking for IPR attorneys. This week, we are releasing the names of best performing attorneys in IPR. This list was constructed based on the 6,580 cases filed from September 2012 through the end of the second quarter in 2017. For this performance-oriented review, we covered more than 5,000 attorneys who were named either on the petitioner side (3,100 attorneys) or patent owner side (3,200 attorneys). The report covers best performing attorneys overall, on the petitioner side and on the patent owner side.

Two weeks ago, in Patexia Insight 48, we reported the most active attorneys in IPR for the same period, covering 6,580 cases. We further explained that higher activity does not necessarily mean better quality. In order to measure the quality, we had to define what is considered the best outcome from the perspective of the petitioner or the patent owner. We first defined the winner for each scenario (final status) according to the following table:

We limited this study to cases that had been denied, settled, instituted or received the final written decision as of September 2017 and excluded all other pending cases.

As you can see, it is more difficult to win a case as a patent owner and that is inline with the general feedback we received from parties involved in multiple IPR cases, meaning that achieving higher performance is much harder for those attorneys representing the patent owners.

We also limited our analysis to only those attorneys who had been involved in a minimum number of IPR cases over the period of this study. Any attorney with less than 20 PO or petitioner cases was not included in this performance analysis. For overall performance, we only considered attorneys with minimum of 40 cases over the period of study (September 2012 to June 2017).

Overall, Larissa Park from DLA Piper led the group at 100 percent followed by David Tennant of White & Case (98%), Michael Diener (88 percent), Michael Houston of Foley & Lardner (86%) and James Hannah of Kramer Levin (79%). The small numbers in the bars below indicate how many cases an attorney won overall and how many they lost. Finding the ratio of wins to the total allowed us to calculate the percentage. 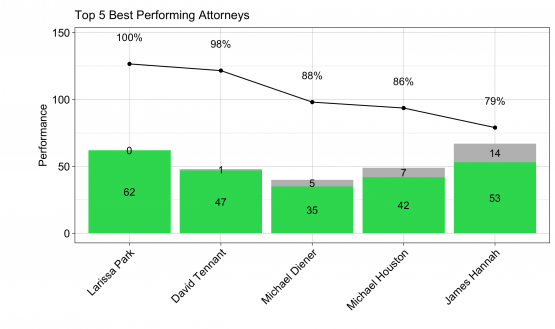 We should also point out that this is for a period of almost five years (September 2012 through June 2017). Attorneys with PTAB experience are currently in high demand and have been moving from one firm to another for better opportunities. The current firm of the attorney is not necessarily the firm where most of their cases originated from. For example for Larissa park and Michael Diener majority of their cases had been filed before 2015 while they were still at WilmerHale.

On the petitioner side, competition was very close. In fact the first six attorneys, all had won 100 percent of all their cases. Larisa Park of DLA Piper (62 wins), Dohm Chankong of Sterne Kessler (37 wins), Richard Kim of Duane Morris (33 wins), John Feldhaus of Foley & Lardner (30 wins), Robinson Vu of Baker Botts (27 wins) and Matthew Moore of Latham & Watkins (20 wins). 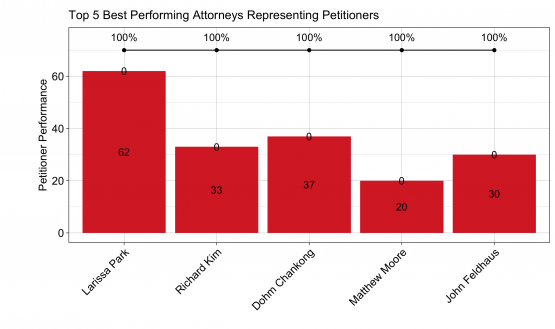 On the patent owner side, as we expected it was much more difficult to win all cases. George Webb of Ahmad Zavitsanos ranked first (93%) followed by Robert Cote of  McKool Smith (91%), Timothy Maloney of Fitch, Even, Tabin & Flannery, Jeffrey Price (78%) and James Hannah (77%) of Kramer Levin Naftalis & Frankel. 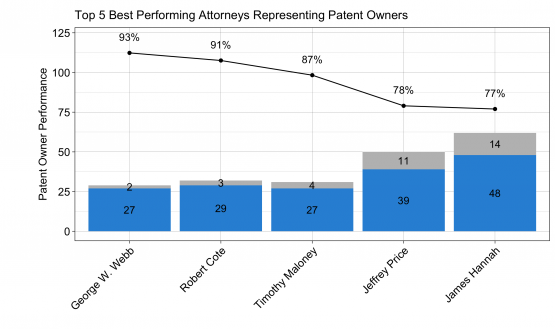 Improving Performance and Ranking Models
We are improving our performance metrics and how we measure them. In our next release of IPR Intelligence report, which will be after the Q2 of 2018 and will cover the cases from Q2 of 2013 through the end of Q2 of 2018, we will use a weighted average model to give higher value to those attorneys who have been active more recently. Therefore, if somebody has only been active 4 or 5 years ago and have had no recent cases, will not be equal to a recently active attorney with similar performance. In addition, based on the feedback we received from some of our readers, we will further modify the performance model to consider the ratio of claims invalidated to all claims challenged for those cases reaching the Final Written Decision. This would be fair to both patent owner and petitioners since the claims surviving an IPR are much more valuable and PO attorneys should receive credit for their hard work.

Demand for IPR Attorneys is still High
As we stated last week, a lot of firms including some of AM LAW 100, which were mostly inactive in early days of IPR, are now looking to expand their PTAB practice. Patexia’s Recruiting Division is actively looking for IPR attorneys as we have a number of clients looking to fill a leadership role for their PTAB practice. Feel free to contact us if you have the experience or you know a group interested in the opportunity.

In the following weeks, we plan to analyze and review the performance of some of the less known and small firms which have outperformed majority of AM LAW 100 in IPR and have been at the top of our rankings. We will interview some of the partners to better understand their practice and what makes them successful. If you have any questions, comments, or suggestions, please don’t hesitate to get in touch.