Happy New Year! We have decided to write more often in 2019 as many of our readers have asked us to bring back our popular Patexia Insight series. Our goal is to bring as much value to the community as possible, so we will do our best to create more original content in the new year. 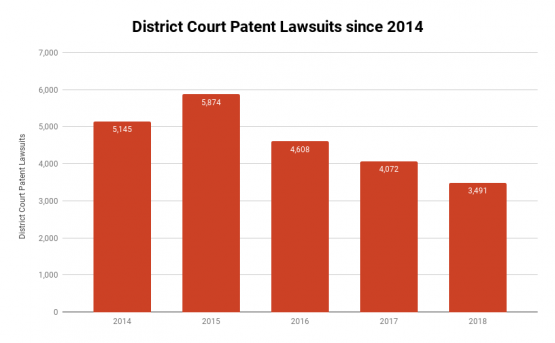 IPR filing also showed single digit decline compared to the prior year. In 2018, a total of 1,606 IPR petitions were filed before the Patent Trial and Appeal Board (PTAB).

This is seven percent less than 1,725 petitions filed in 2017. This decline was expected since usually more than 75 percent of all IPR petitions are filed as a response to district court litigation and we have been seeing a continued downward trend in district court litigation over the past few years. We anticipate that IPR activity will decline even further in 2019. 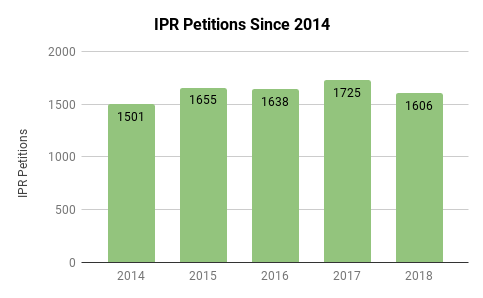 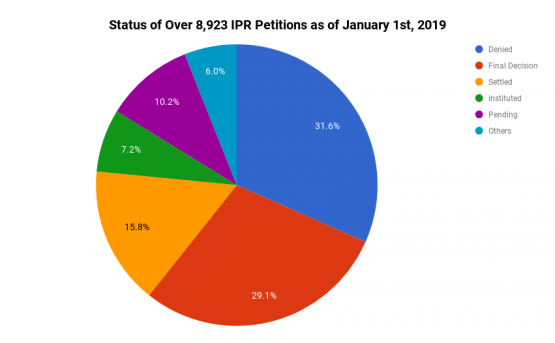 For the first time in 2017, we ranked the top IPR attorneys and law firms,  representing either petitioners and patent owners, in terms of activity and performance. After the positive feedback we received from the IP community, we decided to continue and published our second annual IPR Intelligence Report in September 2018. We have analyzed the performance of more than 1,100  law firms, 3,000 companies and 5,000 IPR attorneys.

Since IPR is such a highly specialized and competitive space, we've seen many companies struggle to find the right counsel for their IP needs. Law firms and attorneys also have the challenge  of distinguishing themselves in the rapidly growing IPR space. We believe with release of such reports, we enable our community of IP professionals to make better decisions based on proven records. Many companies, Am Law 100 firms and top boutique firms have already obtained a copy of the report.

In terms of popular venues for patent litigation, PTAB is still the number one venue overall, but when it comes to district courts, there have been major changes. Eastern District Texas used to be the most popular district court for patent litigation. However, with TC Hartland rulings and limitations on venue shopping for patent cases (TC Heartland LLC v. Kraft Foods Group Brands LLC), Delaware moved to number one (1) with about 697 cases in 2018, followed by Texas Eastern with 504 cases. 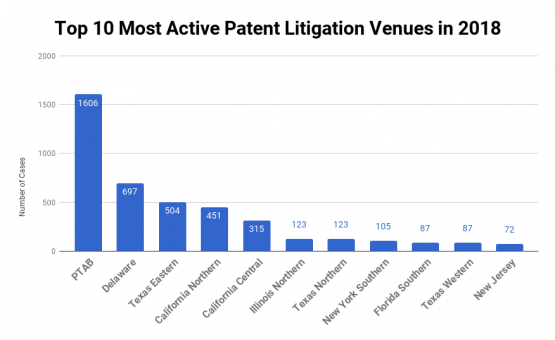 Last year, we started analyzing and reviewing patent prosecution data. We have already reviewed more than 10 million patents and patent applications including assignment history, examiners and attorneys / law firms in charge of prosecution. In the coming months, we plan to release our first Patent Prosecution Report - 2019 Edition (currently available for pre-order at a discounted price of $995). We have ranked the top 500 law firms and companies while factoring in variables such as activity, quality, efficiency and performance. To measure these variables, we have incorporated and analyzed number of filings, office actions, pendency, allowance rate, claim quality, and interviews with examiners among others parameters.

As you know, we use complex natural language processing algorithms to identify the patents / publications related to different entities and resolve entity name issues.  While no method brings 100% accuracy our goal is to ensure the data is as accurate as possible To that end, we have provided easy access for law firms to download their data in an Excel spreadsheet. To review your patents, you can search for your firm here and then directly download a list of all patents in the last five years from the prosecution tab (the download button is only visible and available to attorneys and staff of the firm once they use their law firm email to sign up / login).

In the coming weeks, we plan to review the patent prosecution activity in 2018. Stay tuned...