The number of published applications was almost unchanged. In 2018, a total of 376,608 applications were published. As you know, there is an 18-month delay between the filing and publishing of a patent application.

The following chart shows the total number of issued patents for the last five years, which peaked in 2017. 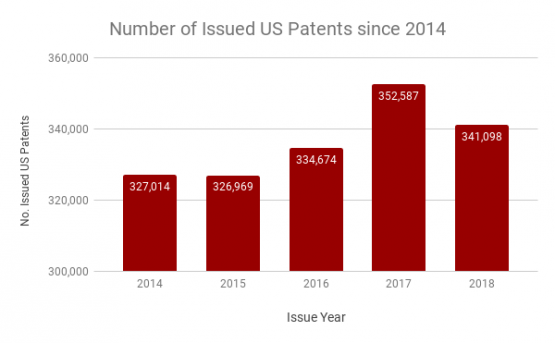 Filing activity remains between 370K to 380K based on the number of published applications. While the ratio of US to non-US patents remained almost unchanged (around 50%), some countries including China showed another year of double digit growth. 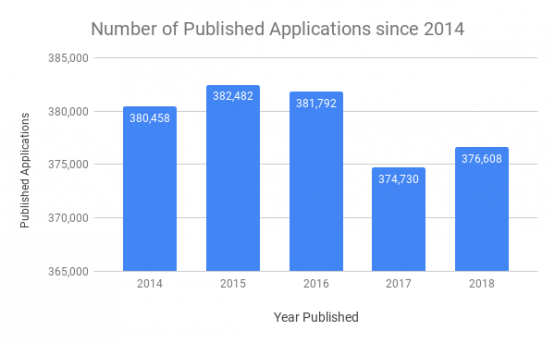 The top five countries excluding US were Japan, South Korea, Germany, China (not including Hong Kong) and Taiwan. France is no longer in the top 5. While this is only based on activity in the USPTO, it somewhat represents the shift in innovation and R&D spending towards Asia. Germany is the only country left among the top five non-US filers. Given that there is roughly a 3 year delay between filing and issuance, with the same pace of growth for China, the country should have already passed Germany and possibly South Korea in terms of number of filings in 2018. WIth the exception of China, all top countries showed a decline in 2018 compared to 2017. 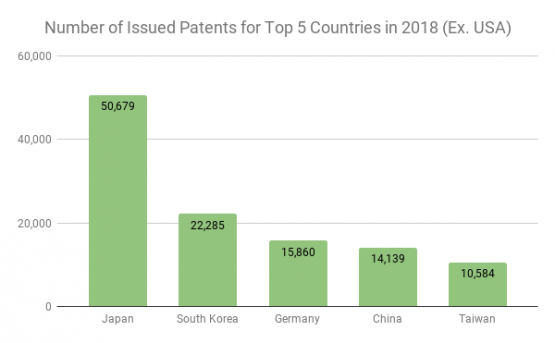 We further looked at the countries to identify the fastest growing ones by the number of issued patents. For the purpose of this study, we only considered countries that have been issued at least 100 patents per year in the last five years. This excluded countries such as Macau which has grown from 3 patents in 2014 to 48 patents in 2018. The following chart shows the top five fastest growing countries. Other than Cayman Islands, all others are based in Asia.

Saudi Arabia has increased their innovation budget substantially in recent years with their plan to build an economy independent of oil (Vision 2030). The country received 762 patents in 2018 compared to 325 in 2014.

China, on the other hand, has grown from 6,567 patents in 2014 to 14,139 in 2018, an increase of 115% in 5 years. The country has had numerous aggressive incentive programs in recent years to motivate people to file more patent applications including even sentence reduction for prisoners if they innovate. While there have been questions about the quality of these inventions, the government is implementing new policies and procedures to improve the quality of patents granted while accounting for the surge in applications. 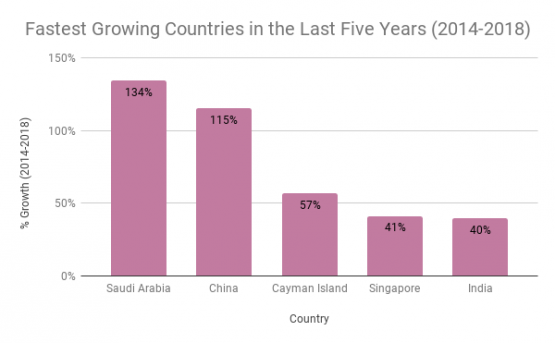 We have looked at about 2.2 million applications and 1.68 million patents issued in the last five years (2014-2018) to rank the top 500 law firms and companies. We have particularly looked at three different metrics to find the top performers: success, efficiency and activity. Out of 5,430 law firms with patent prosecution practice and about 113,000 companies that have received patents from 2014 through 2018, we have identified the top 500. This week we started reaching out to these firms, asking them to verify their data on our site. Firms and companies can now directly download the list of their own patents for the last five years from their pages (this requires sign up (free) and login with firm’s email address). In case your firm has not been contacted by us but you believe you should be among the top 500 firms, please let us know.

To measure the performance of all firms, we have looked at many variables including allowance rate at the application and claim level, the length of the claim, changes in the claim from application to patent, number of office actions, number of time extensions requested, interviews with examiners and many more. The report is now available for pre-order with new year promotional price of $995 on Patexia Insights page.