A few weeks ago we published an article (Patexia Insight 54), explaining why patent prosecution is becoming commoditized  and why some of the AM LAW 100 are clearly abandoning their patent prosecution practices in favor of more profitable work. This prompted us to look into birth rates of patent prosecution firms to see which rapidly growing firms had been created in the last five years, so we could learn more about  the stories behind them.

We also noticed a trend emerging among some of the large corporations. Some of the corporations are increasingly bringing more of their prosecution work in-house, which may put more pressure on law firms as they are expected to deliver better results with fewer opportunities.

We examined year-over-year growth for more than 5,000 law firms, which had at least one or more issued patents over the last five years to see which ones grew substantially in terms of patent prosecution practice. To have a meaningful comparison, we limited our study only to the top 1,000 most active law firms in terms of total number of issued patents in the last five years. This eliminated very small and often solo-practitioners who had filed only a handful (e.g., one or two) applications per year and sometimes showed more than 100 percent year-over-year growth. The top five on the chart below happen to all be new firms that did not exist five years ago. 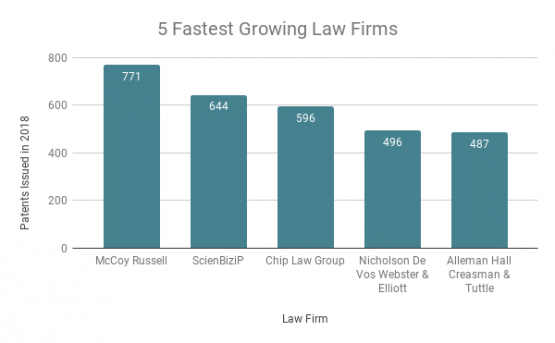 Let’s take a look deeper into their operations to see where the founders came from and how they were able to grow so quickly in the past 5 years.

Several interesting observations: First, there was no large firm (e.g., AM LAW 100) among the five fastest growing patent firms. Second, none of these five firms even existed five years ago.  Third, it seems that they all started the new firm with the knowledge that they already had their first major client. Fourth,the majority of their business (more than 50%) comes from one or two key clients.

We know building a new business requires hustling and is never easy. What we saw in these five firms and the stories behind them are quite common among more established successful firms. Here we summarize some of the key reasons new firms are formed:

We also noticed that some of the larger corporations are gradually changing their filing strategies and bringing more prosecution work in-house. Samsung for example, has been expanding their in-house team. We reported back in 2016 about possible changes in Samsung’s filing strategy in the US, after a number of partners who were working with our recruiting division mentioned that they had lost Samsung as their client. Now after two years, our data confirms that Samsung has added more than 20 new registered US patent agents / attorneys over the last couple of years. The company still obtains several thousand patents per year and in a number of rankings, they are number one, surpassing IBM (depending on which subsidiaries are included in the analysis). There are several other large US and foreign corporations that are apparently following the same strategy for cost control but we still need to confirm that.

Big Data Analysis has enabled us to uncover many valuable insights about the IP intensive companies and their patent attorneys or firms. Leveraging Big Data Analysis, we have been consulting with law firms, providing them with business intelligence insights, to position them for growth or to identify upcoming trends in their segment that may impact their client mix. For example, we examine the IP operation of their clients, competitors of their clients and those firms providing services to them to observe any unusual activity or change. This may include advising them to hire associates / partners with a particular background, approaching particular companies for potential business development, helping them to better understand their strengths and at the same time, how to present them to cover the current weaknesses of their prospects (potential clients) or those firms currently working for them.

We have analyzed and evaluated the performance of the top 1,000 most active law firms and companies over the last five years (overall, or specifically in high-tech and bio-tech). This Patent Prosecution Report will be released on March 6th and you can purchase it directly from our website at a discounted rate of $1,195 for one more week.

Disclaimer: The data for this study was obtained from public sources such as USPTO, PTAB, and PACER. Patexia has gone to great lengths to provide valid and accurate analysis based on this data. However, Patexia does not guarantee 100 percent accuracy nor take any responsibility for possible losses caused by use of information provided in this study.