Last Wednesday, we released our  Patent Prosecution Intelligence Report for 2019, where we have ranked the top 1,000 most active and best performing patent firms as well as patent owners (companies, universities, etc.). For this study, we looked at 2.2 million applications issued or abandoned in the last five years from January 2014 through December 2018. This involved review of more than 5,200 patent firms and over 140,000 patent owners (mostly companies, some universities and government organizations). To measure the best performing law firms, we defined and measured three factors: success, efficiency and activity.

Slater Matsil was ranked Best Performing Patent Firm of 2019 by Patexia. The firm is based in Dallas with 38 patent professionals (27 patent attorneys and 11 patent agents). Our data shows that they have added 8 new IP professionals over the last couple of years, which is about 25 percent growth. During the last five years, the firm has obtained 7,615 patents for its clients with a very impressive average year-over-year growth of about 17.5 percent. 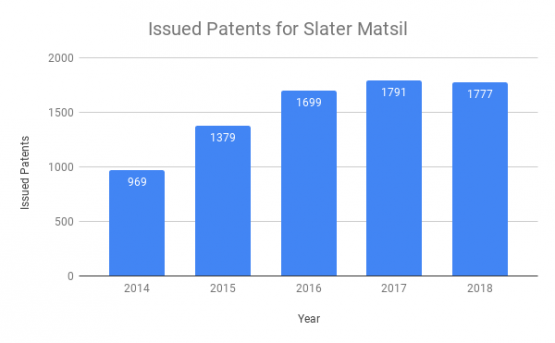 Semiconductor and high technology are the main areas of activity for the firm. The key clients of the firm are non-US tech companies in Asia and Europe. The firm’s top client is TSMC which is responsible for about 47% of their total prosecution workload, followed by Huawei Technologies with 27%, and Infineon with 13%. The top five clients cover almost 97% of the total prosecution work for the firm. 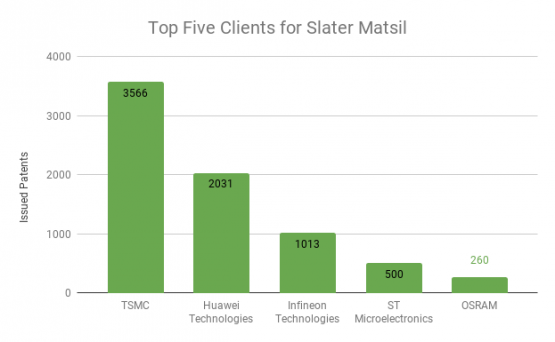 Considering that the newly filed applications are not publicly available for up to 18 months, it is possible that the current mix of clients is slightly different or the volume of work may have changed recently.

About 54% of the firm’s filing activity is categorized under IPC code H01L (“Semiconductor Devices”), which correlates to  their primary client base (i.e., mostly semiconductor manufacturers). Their average number of Office Actions per issued patent is about 2.9. The firm’s overall Allowance rate is about 90% which is much better than 75% for the USPTO for the same five year period. The firm uses interview 50% of the time, which means one interview with the examiner for every two patent applications.

Our analysis of the last five years of prosecution data has once again proved that volume and size are not indications of quality. There were many instances of small or mid size firms coming to the top of our analysis in different categories, but they were not necessarily volume leaders.  At the same time, we had a number of  large firms proving  they are not just about quantity, but their quality has also been quite impressive. Here are three such examples (large general practice, large IP boutique, small IP boutique):

Considering that there were more than 5,280 patent firms which we evaluated, being among the top 100 Best Performers means the firm, is in the top 2%. Quite impressive!

To calculate and measure performance, we looked at many metrics such as activity (number of filings), efficiency (request for time extensions, pendency, etc.), and success (allowance rate at the application level or claim level, changes in the claim language during examination, etc.). We also looked at the office actions at a more granular level, separating different kinds of actions to better understand the strategies different firms or companies take in order to be successful.

We analyzed their actions from a simple response to non-final or final rejections to RCEs and Appeals. This helped us to better understand the effectiveness of the strategy attorneys take in front of the examiners. We have also reviewed and evaluated more than  10,000 examiners and compared their examinations with each other or by Art Unit / Technology Center. For example, while Appeal is generally not as common as RCEs and often times costs the companies more than RCE, our data suggests that in general it has been more effective when it comes to reversing the examiner’s decision. Companies and law firms are leveraging this data and these insights to better prepare their responses and reduce unnecessary cost whenever possible.

We believe everyday analytics will play a more important role in decision making for companies. Over time it will be integrated more in the operation of all industries and legal sector is no different. There is no better way than using data to measure and evaluate the performance of different players in any field.

In the following weeks, we will review and compare effectiveness of RCE, Appeal, … and we plan to continue our review of law firms with an analysis of those firms leaving the patent prosecution space as a result of lower margins and profitability. Stay tuned.