A few weeks ago, we published the top five fastest growing patent firms. We also talked about the challenges the sector is facing and some of the concerns of law firms with shrinking profits in recent years (Patexia Insight 54). This week, we are reviewing the five firms with the largest reduction in their patent prosecution load over the past five years (2014 through 2018).

For this study, we only considered firms that were still in business and had obtained at least 500 patents for their clients in 2014. Many firms were merged and absorbed into larger firms. Several others, unfortunately, went out of business during this period due to variety of reasons, including malpractice lawsuits and departure or retirement of key partners, among other causes.

For example Antonelli Terry Stout & Kraus was a very active firm. In 2014, they filed close to 1,000 patent applications for top Japanese clients, such as Hitachi, Panasonic and Japan Display. However, it seems that the firm had to end its operation during this period because of a patent malpractice case.

The following five firms made it to the top of our list for having the largest reduction in patent work from 2014 to 2018. 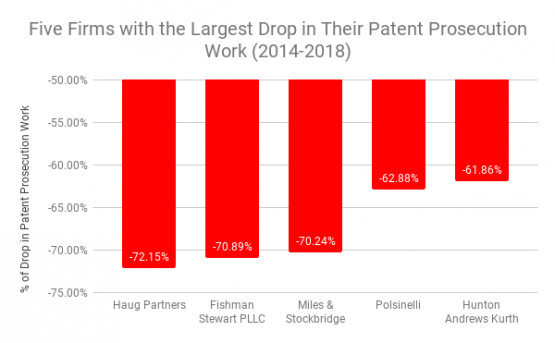 These are all large firms. To better understand the magnitude of drop over the last five years, below we have compared the number of issued patents for each of the above five firms in 2014 and 2018. 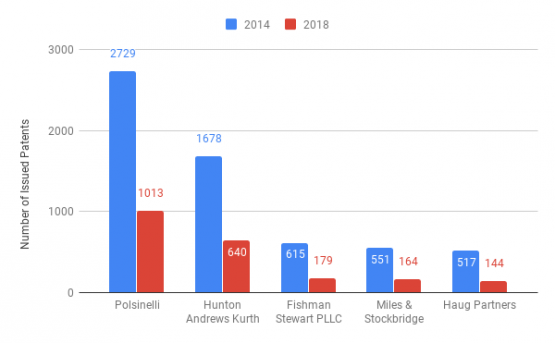 These are obviously not the only firms with reductions. We noticed this drop among many larger firms (e.g., Sughrue Mion, Blank Rome, King & Spalding, etc.). Some of the larger firms, such as Paul Hastings or Ropes & Grey, seems to have completely abandoned patent prosecution work. Some others, like Covington, still do a small but shrinking amount of prosecution.

We covered some of the reasons in our Patexia Insight 54 and explained why some larger firms, especially those with high overhead, located on major coastal cities such as San Francisco and New York, prefer to reduce or stay away from patent prosecution. The main reason seems to be cost and lower profit margins, as companies increasingly prefer to move to a fixed fee model versus the traditional hourly model. While this change has created many challenges for some firms, it has created new opportunities for new firms or those with some flexibility to go with the change.

Patexia’s recruiting division has seen a number of requests by partners or firms looking to add groups or acquire patent firms in the Midwest because of their cost advantage. Some firms are working more strategically and keeping the relationship partners in areas with higher concentration of tech / bio-tech companies, including San Francisco and Silicon Valley, while acquiring or forming strategic partnerships with attorneys in less expensive states, such as Georgia, Colorado and Idaho, to perform the actual work.

We believe that in the next five to ten years, we will see many consolidations. Several firms with efficient business models designed to work in this competitive environment will emerge and move to the top.

This means we will gradually see a shift in the behavior of law firms to adjust to new metrics that companies use or demand. At the same time, this means there will be new and promising methods for some ambitious law firms to differentiate themselves from others.

Technology has now made it possible to measure some qualities of patent prosecution and quantify them mathematically using artificial intelligence, machine learning and access to big data.

We released our first Patent Prosecution Intelligence Report last month. Many companies and law firms have since obtained a copy of the report. Companies are using the data to understand the performance of their patent firms compared to other firms, learning how they can improve their work, such as by possibly consolidating some of their counsels or finding other areas to reduce the cost. Law firms, on the other hand, are taking advantage of the data to see how they can better market themselves to existing or new clients by focusing on their strength backed by numbers.

We have expanded our studies even further and now are performing cost analysis and portfolio quality assessments for some of our clients. These studies will help companies gain an overview of how their counsel work.

For example, in one study, our client realized that although the firm it had hired charged a lower flat fee per office action, historically it tended to file more office actions than another firm that charged slightly more, but better prepared responses. We even compared the final claims with original claims to see if filing of some of those RCEs or appeals really made a difference in the final product. Tools like this will improve over time, becoming an integral part of any patent firm or company with substantial patent work.

Thanks to AI and access to powerful computation, there’s more transparency and efficiency in IP!