Search
Pedram SameniFeb 24, 2021Legal
Patexia Insight 100: Patents Down in 2020 and the downtrend May Continue

Last year we wrote about the impact of the pandemic on the US patent activity and the patent prosecution practice (Patexia Insight 79). We estimated a drop of 2 to 4 percent in the filing activity in 2020 and 2021, mainly due to the weakening global economy in many sectors, which was accelerated by the pandemic.

This week we will look at the patent activity and see if any of our predictions have come true. We will also talk about the best sectors and geographical locations that patent practitioners can gain or expand their clients.

The US patent office has not yet released the number of new filings in 2020. This number usually comes out in the second quarter of the year. But for the time being, we are going to analyze the number of issued patents as well as the maintenance payments by majors corporations to see if there are any signs that we can use to find out the impact of the pandemic and also figure out the trends in the following years. 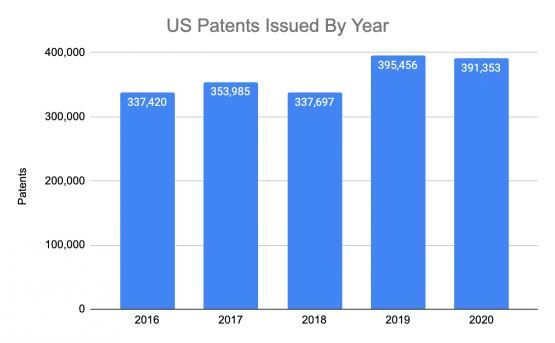 There is usually a 2 to 3 year lag between filing and issuance. Therefore, we will see the true impact of 2020 filing activity in 2022 or later. This one percent drop was expected as we explained the general slowdown in recent years in Patexia Insight 79. We believe the pandemic may just accelerate this decline in the following years.

Activity of the Top 10 Most Active Companies

If we take a closer look at the activity of the top 10 USPTO Clients, we may learn about the trends. The following chart shows the number of patents issued to these 10 companies for a 5-year period from 2016 through 2020. 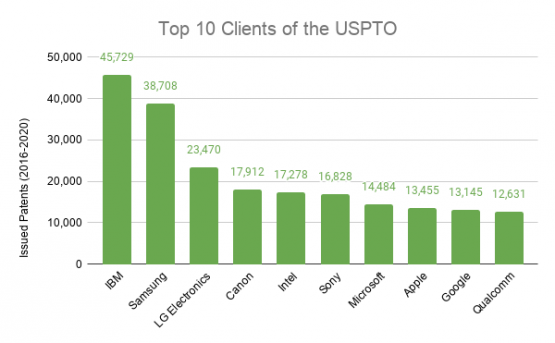 During this 5-year period, the USPTO issued approximately 1.8 million patents. The top 10 companies, made up to 12 percent of the PTO’s total volume. Therefore, any significant change in the behavior of these companies will impact the USPTO’s revenue and also may trigger other companies to adjust their strategies in a similar fashion.

IBM has been the volume leader for more than 28 years and while the company has maintained its top position as the most active filer, a comparison of their activity in the last two years shows that they are slowing down. In fact, our review of the top 10 companies shows that almost all of them have had a drop in the number of issued patents in 2020. Only Apple shows double-digit growth in 2020.

Analysis of activity by Country

One apparent trend in the above table is the drop in filing activities by foreign companies such as Canon. Japan has been the largest client of the USPTO after the US. Our review of 2019 and 2020 issued patents show that filing by the Japanese companies has dropped from 57,205 in 2019 to 55,237 in 2020. This represents a 3.5% decline.

China activity may also slow down once the foreign patent subsidy by the local Chinese government ends in 2025 (in fact, some subsidies may end as early as June 30, 2021). USPTO released a report on January 13, 2021, highlighting some of the non-market factors, contributing to higher filing activity by Chinese entities (Read the full report here).

Last year we predicted that many companies will reduce their IP spending by reducing their patent renewal budget. This means more patents will be abandoned due to non-payment of maintenance fees compared to prior years.

Our data also shows that patents that were due for the second maintenance payment had the highest rate of drop. In 2020, the non-payment of the 2nd maintenance fee increased 15 percent.

We estimate that this drop in renewal reduced the USPTO’s revenue by more than $40 million in 2020.

We also reviewed the maintenance payments for IBM to see if the company as the volume leader has changed its strategy and has reduced its IP spending in 2020. Our data shows that the company abandoned 7,785 patents in 2020 compared to 6841 in 2019. This represents approximately a 14 percent increase in 2020. We also found that IBM increased the rate of abandonment for the 3rd maintenance payment by as much as 27 percent in 2020 compared to 2019.

The above analysis suggests that both “micro” and “macro” effects are important and law firms or companies should consider both when defining their IP strategies.

Patent firms and attorneys should focus their business development efforts on innovative companies specially the emerging technologies. Some of these companies will take the position of some of the current top 10 in the next decade.

In the following weeks, we plan to review some of the best performing and most active law firms in district court patent litigation in 2021.