Earlier this year we released our first Patent Litigation Intelligence Report. In this inaugural report, we evaluated the district court patent cases filed between July 1, 2017, and June 30, 2020. During this 3-year period, a total of 10,552 patent cases were filed. In total, 11,786 companies were named either defendants or plaintiffs and were represented by a total of 12,780 attorneys and 2,841 law firms. We ranked all the stakeholders (i.e., law firms, attorneys, defendants, and plaintiffs by activity and performance. 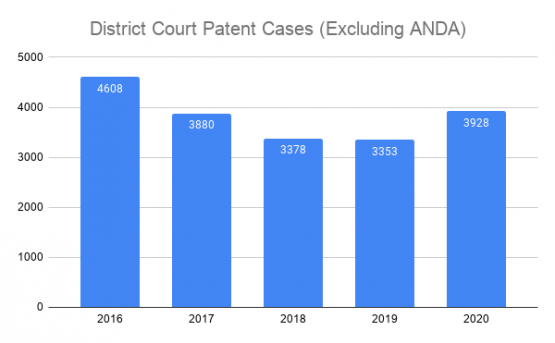 For this analysis, we measured the activity and performance of all stakeholders including plaintiffs, defendants, attorneys, and law firms in the following six categories:

Activity = Weighted Average of Number of Cases and Unique Patents

To calculate the performance, we combined the activity and success for all the stakeholders. This is because corporate in-house counsel prefers to hire a firm that has the right experience which is a combination of activity and success. A firm with lots of unsuccessful cases is not considered the best despite all the experiences and similarly, a firm with a single successful case is not considered the best firm either.

To measure the success, we only evaluated the terminated cases. At the time of preparing the report, we counted a total of 5,998 terminated cases for the 3-year period of the study. The following table summarizes our methodology for success measurement:

The complete report covers the top 1000 most active law firms, attorneys, and companies. It also includes the top 3 clients for each of the firms and law firms as well as the top 3 firms representing each of the defendants and plaintiffs.

The following table lists 15 of the best-performing and most active firms. Being ranked in the top 100 out of 2,841 firms places the firm in the top three percent (3%) in that particular category:

In the following weeks, we plan to cover some of the best-performing ITC attorneys and law firms in 2021. We will also analyze the current status of patent-related Federal Circuit cases (CAFC) originated from PTAB, ITC, or district courts. Stay tuned!