As we prepare to publish our first Federal Circuit IIntelligence Report, we plan to dive deep into the Federal Circuit patent cases, their origins, filing activity and its process.

In Patexia Insight 103, we examined the current trends of patent litigation in Q1 of 2021 and found that the Federal Circuit cases were slightly decreasing compared to the previous quarters (178 cases in Q1 vs. 193 in Q4 of 2020). For the CAFC Cases we only considered those cases that originated from the Patent Office (PTAB), the International Trade Commission (ITC) or one of the district courts but only if the nature of suit was related to patents.

In our upcoming CAFC Intelligence Report, as per our tradition, we plan to analyze a 5-year period from January 1, 2016 through December 31, 2020. During this 5-year period, we have identified a total of 4,825 Federal Circuit cases that originated from PTAB, ITC or one of the district courts and were related to patents. Besides that, we reviewed all involved parties and their representatives in these cases and counted:

The following chart shows the distribution of cases based on their origin. Out of 4,825 cases, a total of 2,954 appeals are related to PTAB while there are only 103 appeals from the ITC. Cases with the district court origins are 1,768 or about 36% of all. 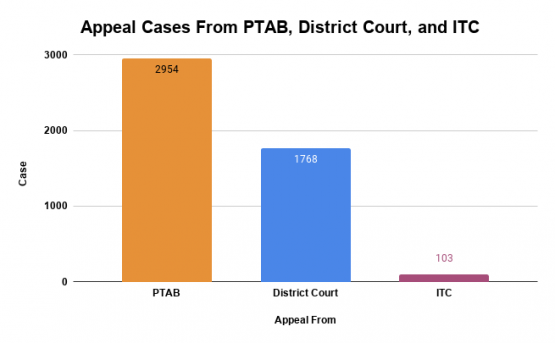 Since its creation in 1982, the US Court of Appeal for Federal Circuit (CAFC) has been the central forum for reviewing the nation’s patent disputes. Post-AIA, the forum has even become more popular as the majority of patent-related Federal Circuit cases originate from the PTO.

Once a decision is made in CAFC, that decision becomes final and appealing it to the supreme court is very difficult. The supreme court takes less than 100 cases a year, therefore the last stop for technology disputes is usually the US Court of Appeals for the Federal Circuit or CAFC. A majority of CAFC cases come from PTAB with 562 cases in 2020 and 127 cases so far in 2021. Fish & Richardson is the most active firm in this forum and has been involved in 285 appeals from PTAB (or almost 10% of all PTAB-related CAFC cases) in the last five years (2016-2020).

On the other hand, while the lowest percentage of cases originates from the ITC, this number has been slightly increasing every year since 2016. In 2020, ITC cases increased by 18 percent compared to 2019. 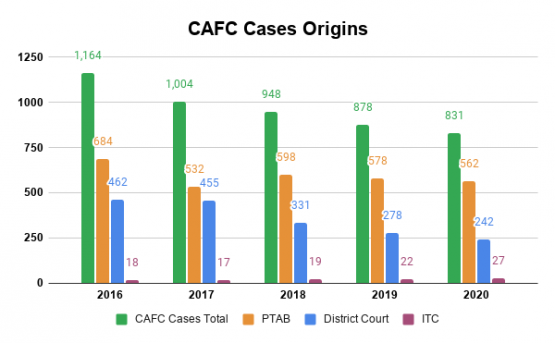 If the parties continue the appeal, they must give the court of appeals a record of the oral proceeding and documents filed in the trial court. These parties will have 14 days to file their documents and give notice of appearance in the trial. Once the record on appeal is filed by the appellate court, the parties must prepare their brief.

Opening briefs can be no more than 14,000 words while the reply brief is maxed out at half as much (7,000 words). The clerk’s office will issue a notice of oral argument around 6 weeks before the scheduled court session.

Oral arguments should take no more than 15 minutes per side, this includes the rebuttal time as well. In the end, a decision is made by the panel of judges and will take about 3 to 4 months to make from the oral argument. Once the decision is final they announce the court's order and the appeal is over. Parties typically do not want to appeal to the supreme court because of the low percent chance of their case being picked up.

Final decisions may be one of the following or their combination (or “in-part”): Affirmed, Vacated, Remanded, Dismissed, Reversed, or Denied. To measure the performance of attorneys, law firms and companies, we will be using the final decisions to calculate Success and Performance Scores for each of the parties or their representatives.

In the following weeks, we plan to review some of the best ITC Section 337 attorneys and law firms. The full report was released last month (ITC Intelligence Report 2021). Stay tuned!