Next week we are going to release our Third Annual Patent Intelligence Report where we analyze the patent prosecution data, providing different statistics related to the USPTO, Technology Centers, Art Units, Examiners, Law Firms and Corporations.

Last year, many sectors in the US economy were heavily impacted because of the pandemic. The patent prosecution practice and intellectual property were certainly affected as companies adjusted their filing strategy. We also observed some significant shifts in the patent work distribution, which is what ultimately inspired this week's Insight.

This week we are going to inspect the patent data related to the law firms to identify the firms with the largest growth and decline in 2020 compared to 2019. 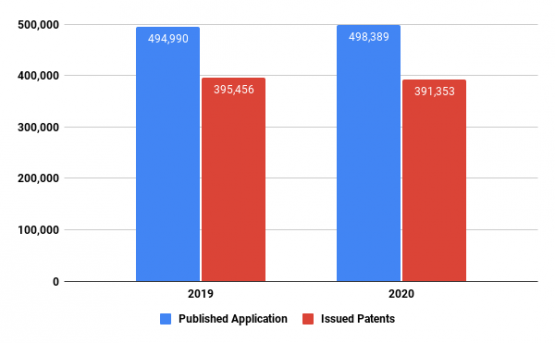 As seen in the bar chart above, in 2020, a total of 498,389 patent applications were published and 391,353 patents issued. The number of issued patents reflect a 1.05 percent drop compared to 2019 while the published applications show a 0.68 percent rise.

Patent firms with the largest growth

To identify the firms with the largest growth, we limited the study only to those firms that were ranked among the top 1000 most active law firms in our 2021 report. Then we calculated the growth rate in absolute terms by comparing the number of issued patents in 2019 and 2020 as illustrated by the bar chart below. 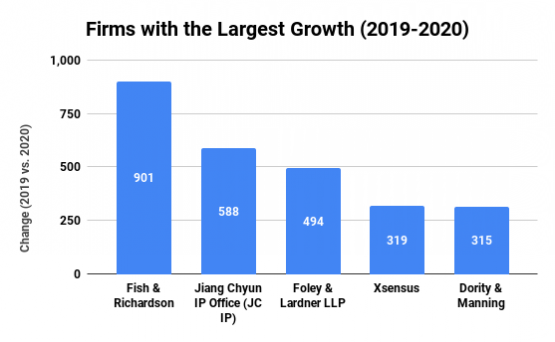 Patent firms with the Largest Decline

The firms with the largest decline are shown in the bar chart below. We measured the decline in a similar way as for the growth (only measured among the top 1000 most active firms and based on the absolute change). 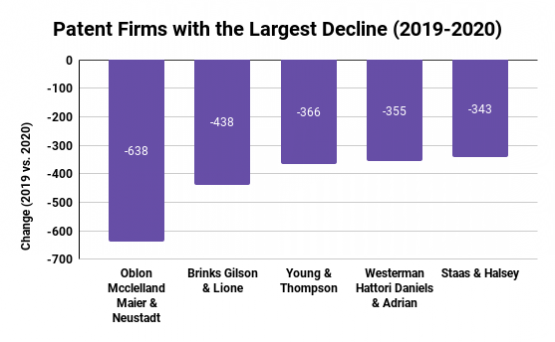 Our 2021 Patent Prosecution Intelligence Report has a new section that covers the top 50 firms with the largest growth or decline in 2020. The report will be available for download next Thursday, June 10, 2021.

In the following weeks we will continue our analysis of patent firms. We will cover the most active and best performing firms as well as the companies with the largest growth or decline in the number of patents. Stay tuned!